The Apple Watch is one of the most popular smartwatches in the world from the moment it was announced. And we’d imagine the Moto 360 is going to be the most well-known Android Wear watch. We have both in-house right now, so let’s have a quick look at two different approaches to the smartwatch. In this article, let’s talk about Apple Watch versus Moto 360 – Which one is Better?

Before we jump in, keep that in mind that the phone you own might make your decision for you. The Apple Watch needs an iPhone (5 or newer). And the Moto 360 needs an Android phone to connect(running Android 4.3 or higher).

You have to remember that there are multiple styles to choose from for each watch. We are handling the 42 mm Apple Watch Sport in space gray color (US$400 retail price). And the silver Moto 360 with silver steel band (technically $300, however, on sale at the time of publication for as little as $230). 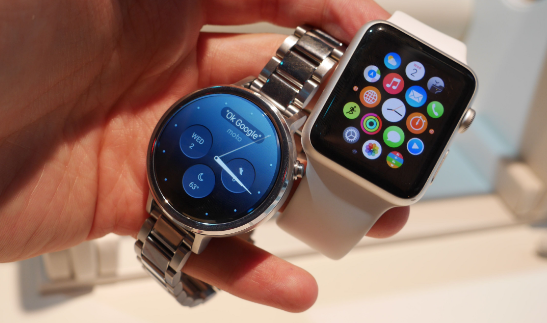 Both of the devices are water-resistant as well, which is definitely a must-have on any electronic device worn on your wrist. Activity tracking is also available along with heart rate sensors on each device and it’s safe to say that you’ll get about a day’s worth of use on a full charge. Although Motorola also claims that the Moto 360 will last up to 1.5 to 2 days depending on which size option you choose. Either way, you have to expect to charge any of these watches at night.

The Moto 360’s size does give it one advantage: that is its big screen. The Moto’s almost-round display that (see that cut-off point at the bottom?) is roughly 69 percent bigger than the Apple Watch’s screen.

However, the Apple Watch does have better screen quality. It is noticeably sharper (a 302 PPI pixel density vs. 205 PPI for the Moto). The Apple Watch also has better contrast and also richer colors. But the size of the Moto’s display, combined with those narrow bezels, still gives it a mesmerizing quality that you don’t really get from the Apple Watch.

Both of the watches’ software centers around notifications and instant access to other glanceable info that you’d normally whip out your phone to quickly look at. Google’s Android Wear takes the simpler approach, with its UI revolving around flicking via Google Now cards. The Apple Watch OS has a more complicated focus, along with its more of a learning curve.

Right now Watch OS is more app-oriented than Android Wear, along with Apple enjoying more early enthusiasm from developers. Wear has a decent application selection, but even after being around for almost a year, the Apple Watch had it beat in the third-party app department on Day One. An upcoming Android Wear update, though, will try to give it a boost in this department – it will give users easier access to their app libraries.

Apple’s app situation is not really perfect though. Load an Apple Watch app, and you might be waiting for as long as five seconds when it loads. In today’s world of zippy mobile devices, it stands out and sadly, not actually in a good way. 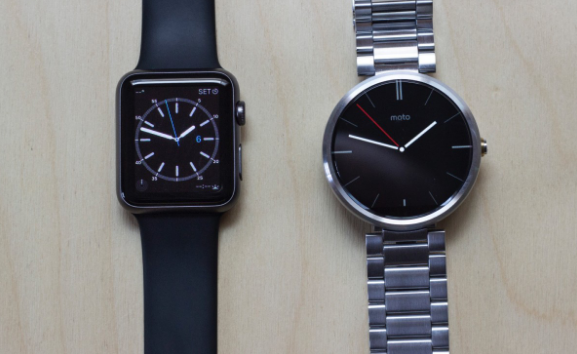 If you are only in need of notifications, then it may be safer to stick with the Moto 360. But its $299 entry point for a base model may drive potential customers over to an Apple Watch for the native support. That starts at almost $349 for the Sport model. It’s good to see Android Wear playing nicely with iOS. But there is actually an obvious risk taken given that Google can only support so much without being able to click into the full potential of iOS. However, at the end of the day, this choice comes down to personal preference. But if you are aiming for simplicity then it’s really possible that you’ll be happy with the Moto 360 or any Android Wear. That is offering that’s compatible with iOS.

The two watches alert you to notifications in totally different ways. The Moto 360 gives your wrist a little buzz, just the same as what you’d get from a vibrating smartphone. However, Apple used some advanced technology (“Taptic Engine”) that feels like the Watch actually is tapping your wrist. If you know someone else who also has an Apple Watch, then you can virtually tap each other’s wrists. Or also even share your heartbeats (a little gimmicky, but it does add a human element).

Battery life is also an advantage for the Apple Watch, but not by a wide margin. With moderate use, we can finish a day with the Apple Watch having around 50 percent battery left. On the Moto 360, it is much more like 40 percent left.

Alright,m That was all Folks! I hope you like this Apple Watch versus Moto 360 article and find it hep=lpful to you. Also if you have further queries. Then let us know in the comments section below.

Also See: How to Unpair Apple Watch without Phone