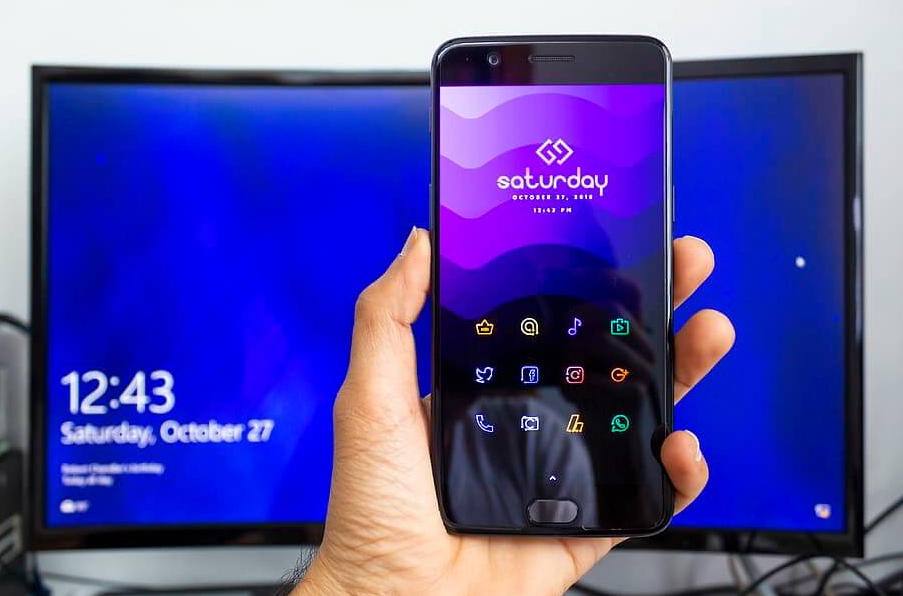 Do you think android can cast screen to TV? What do you know about it? If you’re tired of your mobile phone while watching a movie, wouldn’t it be convenient if you can play it on a big screen? Well, you can do this but getting it onto your big-screen TV is not always an easy process. There are lots of choices to select from. The most popular one is – Chromecast.

Well, I personally recommend a Chromecast for casting your iOS or Android device screen to the TV. But it is not the only chocie out there. Over the past weeks, we have examined different methods to mirror your mobile to your TV. From Apple TV to Smart TV to MHL cable, every method has its own cons or pros:

Also See: How Do I Mirror Mac to Firestick & Best Apps

iOS Or Android Cast Screen To TV Without Chromecast

Follow the ways to know how android can cast screen to TV: 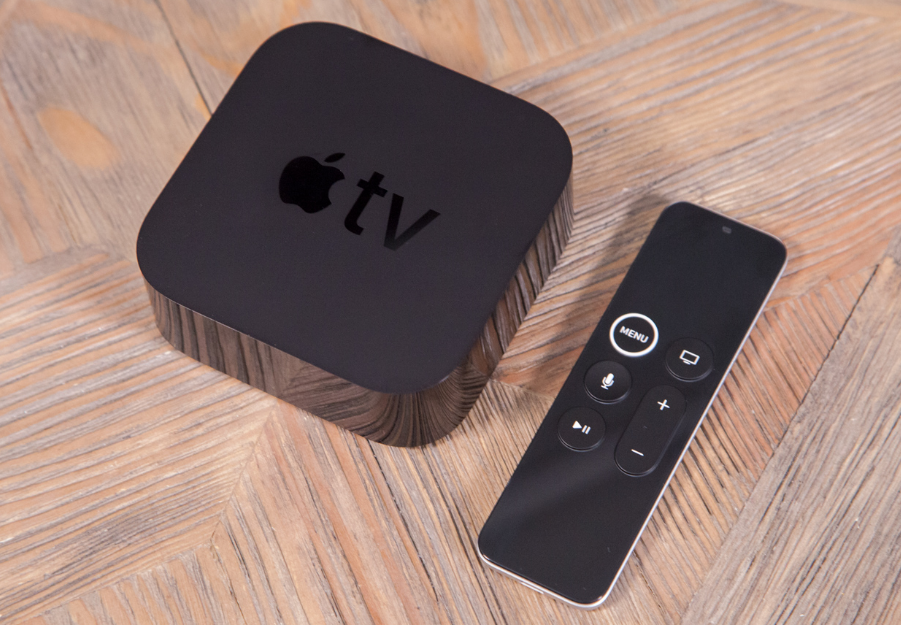 Have mobile and a simple TV with just an HDMI port? Well, Chromecast is not the only option to stream device that can cast mobile to the TV. Roku, Amazon Fire Stick, Apple TV, etc they all offer screen mirroring options built-in.

While Amazon FireTV stick is not as best as chromecast, when we talk about streaming, it still works. You can also reach the mirroring option after hitting and holding the Home button on the Amazon Firestick remote.

Roku 2017 and above versions are also compatible with screen mirroring for Windows 10 or Android users. To turn on mirroring on your Roku head over to Home > Settings > System > Screen Mirroring. Once there, choose your preferred way of connection. Then, on your mobile device, move to Settings and look for Wireless Display Options. You should then view the Roku wireless display there. Just tap on it followed by the cast screen to initiate the connection process.

Apple TV offers one of the easy smartphone mirroring options but it comes with a restriction of being able to be connected to only an iPad or iPhone only. You can also tap on the screen mirroring icon in the control bar after swiping up from the bottom of the screen and tapping on your Apple TV’s name. And not just this, you can also record your Apple TV screen using your Macbook.

All in all, when we talk about screen mirroring Chromecast is the king. It works for iOS or Android, without any lag. While Firestick, Roku, and Apple TV are also another best choice if you already have them.

What is the Screen Mirroring?

Screen Mirroring is basically a way through which you can remotely share or mirror one device screen to another. Such as mirroring Android Screen on your PC or vice-versa actually. In this article, we are talking about screen mirroring on Android.

A phone screen on a PC can actually help you in a lot of ways. For instance, it deletes that extra step of grabbing the smartphone for each and every new notification; If you are a developer, then you can check app performance on the Android phone mockup; sharing media files to PC also becomes pretty easy.

AnyCast – cast screen to the TV with WiFi

Like the earlier method, this one is another hack than an actual method. Rather than getting a Smart TV, a good solution is to get an inexpensive Miracast dongle from Amazon. Keep in mind that it is a cheaper option than chromecast. However, they come from a local brand, and compatible with 3 modes, Airplay/DLNA/Miracast. It means that it’ll not only work for Windows PCs or Android but also compatible with the Apple ecosystem.

If you want to get begin, just plugin the Anycast dongle to your TV HDMI port and then switch it on using the USB cable that comes with it. You’ll then view the AnyCast page under your WiFi settings, plug it with your WiFi network and it should initiate casting your mobile screen to the bigger TV.

Make sure that some streaming apps (such as Jio TV or Hotstar) do not compatible with screen mirroring while using Miracast standard. So, before you should make a purchase.

Well, screen mirroring is best with no lag, the only problem is, a decent Miracast dongle will cost you 15 to $20. You can easily purchase a Chromecast for $35, which offers lots of amazing features over Miracast dongle. Want more ways to know how android can cast screen to TV? Dive down below!

Also See: How To Cast Video From VLC – [Stream From VLC To Chromecast] 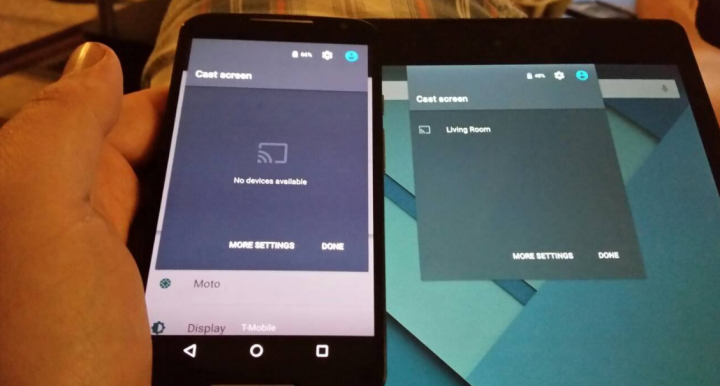 But what if you don’t wish to carry an additional dongle with you all the time? Then smart TV comes in.

Some smart TV’s come equipped with Miracast. It means you can connect your mobile to the TV directly, without any additional support. For example, we are using LG smart TV and it is compatible with screen mirroring via Miracast.

For those who don’t know, Miracast is wireless standard, designed for mirroring Android devices, Windows PC screen to the TV without any extra physical cables. Roku or FireStick both use Miracast standard, and so does some Smart TV. That is why you’ll find some Mirroring devices that support Android and Windows PCs but not with Apple devices.

However, there is a drawback to using Miracast. Besides Google’s Chromecast or Apple’s AirPlay, which can directly pick the video source from the web (such as when casting YouTube videos from the Chromecast) Miracast alternatively, can easily mirror a device’s screen. It means, with Miracast, your mobile screen would have to stay ON the whole time.

Overall, if you are searching for a long-term solution for your businesses, Miracast can make slide shows, video conferencing, and product demo. For home users, Miracast offers the best way to stream HD videos.

Want more ways to know how android can cast screen to TV? Dive down below!

Also See: How to Change iPhone IMEI Without Jailbreak

We don’t recommend you to get a smart TV for screen mirroring, there is another cheaper or effective way to do that.

For instance, if you just like to mirror your mobile to TV for a one-time presentation then it makes no sense to purchase an expensive device. Rather than, if you have a computer handy, you can then use it as a bridge. Just connect your Windows PC to your TV through an HDMI cable and set it up, to be used as an external monitor. This way, everything that you can view on your laptop will be cast to your TV.

Now you should mirror your Android screen to your PC. Although there are lots of apps that do that, we recommend the Airdroid app. All you need to do is to install Airdroid on your mobile device. You can then connect it to your PC through a web browser. Then, when you tap on the screenshot button, you can view it’ll begin casting your Android to your laptop, which can cast it to your mobile device.

After this, you can disable the screen of your laptop and cast your mobile screen to your TV. In our examination, there was a little lag in screen mirroring, you can’t cast videos or games. Also, there is no audio as well. Overall, this technique is a quick solution but not efficient in the long run.

Also See: How To Transcribe YouTube Videos Or Audios With Google Docs 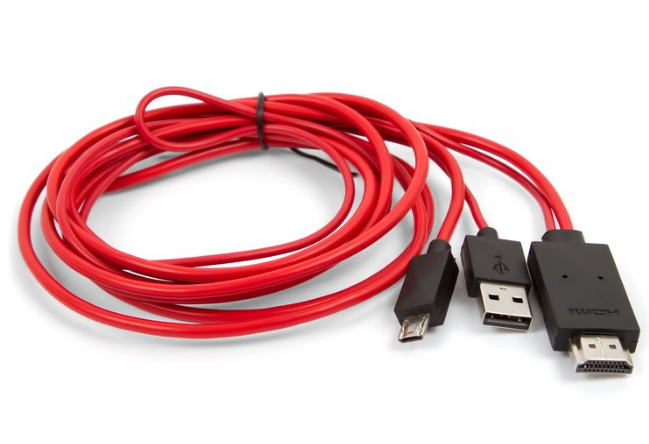 MHL cable can cast your mobile screen to a larger screen. However, MHL cable can support screen mirroring right out of the box. Just connect one end of an MHL cable connect into the micro USB port on your mobile but the other end will connect into an HDMI port on a TV or monitor. There is also another USB end, that acts as a power source, you can either connect that to the USB port of your TV (like you do with Firestick or Chromecast) or put it on a wall adapter.

If you like to connect an Android device to a TV, just put the HDMI end to the HDMI port of your TV and switch on the USB as well. Then plug the other micros USB end to the Android. And that’s all about it, it’ll begin cast right out of the box.

Similarly, if you like to connect iPhone to a TV, you can then get the same cable with a lighting connector on it  Although, we had to add our TV as a trusted device for it to work.

If we talk about its performance, then there is no lag and you can easily cast Audio as well. Making it perfect for home or business use.

The only drawback is, MHL needs an MHL-compatible device. So, before you purchase an MHL cable, Google if your devices are compatible with MHL.

Well, there are different ways to mirror your mobile screen to a big TV. In some situations case, streaming devices are the best option, especially Chromecast. Smart TV is another best choice if you are searching for something permanent. And at last, if you are wondering for a cheaper solution, the try MHL kit, though before buying, make sure it can support your device.

So, I hope you understand how to mirror your smartphone screen to TV, what did you guys think about it? Do you have any better workaround that we miss? Let us know your thoughts in the comments section below.