Version vs Build vs Architecture

Before we explain what Windows 10 version the Media Creation tool downloads, there are basically three concepts that we want to explain. The word ‘version’ is basically used interchangeably to describe many different aspects of an operating system. Folks use it to refer to a version of Windows e.g. Windows 7 and Windows 10, then use it to refer in order to the build e.g. 1507 or Creators Update, and they also use it to refer to the architecture that is 64-bit or 32-bit.

Well, Windows 10 has two main versions or editions; Pro, and Home. Other editions include Windows 10 S and Windows 10 Education as well.

Windows 10 has many builds. Much like apps that have versions e.g. v.1, v1.2, etc, Windows 10 has build numbers and a subset version number that basically corresponds with it as well. Microsoft also uses the word version in order to describe it as well so it makes sense if the users confuse the two.

The version is also updated when a large feature update is rolled out to all of its users. However, the xamples of Windows 10 versions are 1507 (the very first version), and version 1709 (the current version). The examples of the build are build number 10.0.10586 for when the Windows 10 was first released, and the build number 16299.125 the current build at the time of writing actually.

Well, architecture has to do with your processor’s capabilities actually. This is a hardware property and your OS’s architecture must match it actually. All of the Windows versions support both the 32-bit and 64-bit architecture actually. 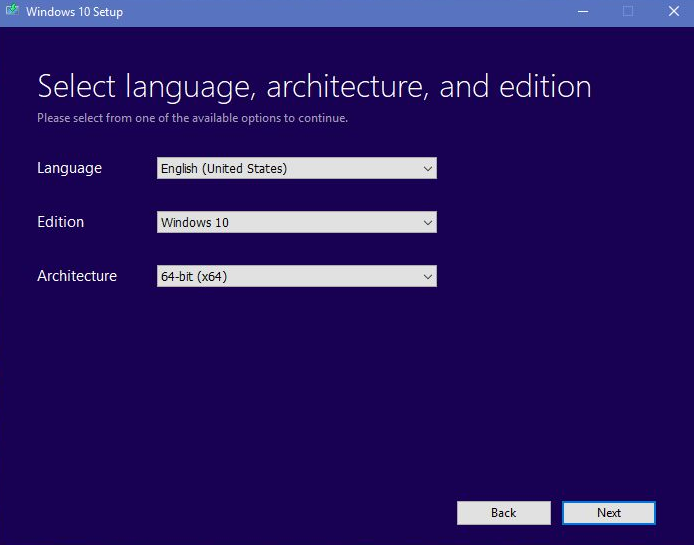 The Windows Media Creation Tool is a Microsoft-licensed program that actually lets you download the latest version of their operating system for free of cost. You can also create a portable ISO in order to install it on another PC or also save it just in case your device crashes.

The Media Creation tool can also download any edition of Windows 10. Whenever you install Windows 10 along with a USB, it asks for a license or reads it automatically from your motherboard during installation actually. That is how it determines which edition it should install as well. The edition is determined by your license and the tool can also install any of the four editions too.

The Media Creation tool always downloads the latest stable version and build of Windows 10 as well.

Whenever you download Windows 10 in order to create installation media, it then asks if you want in order to create the media for 32-bit, 64-bit, or both of the architectures. This is one of the few choices that you have to make whenever using the tool. And it’s always a good idea to download both architecture types if you guys are creating installation media actually.

If you guys want to know the particular build number that the t00l will download, then right-click the EXE and choose Properties. Head to the Details tab and then look at the File Version entry. Well, the version number is basically the build number after the 10.0.1 bit. Google the build number in order to find out which update it is for i.e. Month/Year as well.

Alright, That was all Folks! I hope you guys like this “does media creation tool download” article and also find it helpful to you. Give us your feedback on it. Also if you guys have further queries and issues related to this article. Then let us know in the comments section below. We will get back to you shortly.