Do you want to block suggested video overlay on YouTube? YouTube lets users promote their videos simply by adding suggested videos as overlays on top of the one you’re watching currently. The overlay consists of a link to subscribe to the channel or a few videos you’re watching. Some channels are careful so that the required suggested content can’t block any part of your video. You can also check an example of this simply by visiting the official channel for SNL where the video contains footage that you don’t need/want to watch and at the top of which the suggested video overlay appears.  Come let’s check how to hide the overlay.

If you want to hide the suggested video overlay on YouTube videos, you want an extension or an add-on that can block elements of the web page. However, there are some extensions that can do that but most of the reliable of efficient one is Adblock Plus. The only drawback of using this extension is that you run the extension on YouTube i.e. you can’t include YouTube in your given whitelisted apps.

How To Hide Suggested Video Overlay: 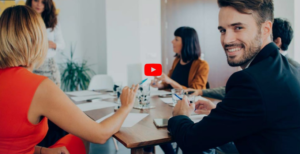 All you need is to install Adblock Plus in your browser. The Adblock plus is available for both Firefox or Chrome. Remember the extension is turned on so that it blocks all ads on YouTube. Head over to the YouTube video that you know to display a video overlay. Simply play it or skip ahead until the overlay appears, and then pause the video.

Tap the Adblock plus icon located next to the URL bar, and choose Block Element from the menu that opens. When you tap ‘Block Element’ you can then choose one element to block. Move your mouse pointer over to one of the suggested videos.

A yellow highlight will show that it will be selected.

Then tap it and a new window appears asking you to add a new rule. Just tap Add, and then repeat the whole process for all the suggested videos in the overlay. You want to repeat this step many times when a video overlay has many elements; title, video frame, video container, etc.

If you do it right, just do it once. Then block all the elements and you can’t view an overlay on any video ever again. When you’re done, simply play the video from start to end and then check if any other elements of a suggested video display on the top of the video. If they do, just pause it then block the element via Adblock plus.

It becomes quite simpler or easier to do. YouTube doesn’t have any rules about displaying suggested videos. Anyone who add the overlay and those who watch the video can’t even dismiss them.

To hide suggested videos may seem complicated but fixing it is quite easy and simple. It’s an issue with the overlay so you don’t need to worry about fixing it. If you want to share anything else regarding this then let us know below!