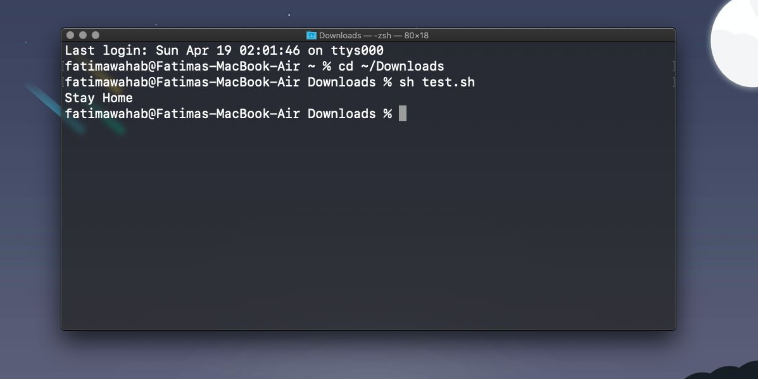 If you want to test this, then you want a Shell script that you can run. Head over to a text editor e.g., TextEdit, and paste the following command in it. Then Save the file with the .sh file extension.

Initially, head over to the Terminal on macOS. Then use the command cd to move to the folder. The location in the below-mentioned command is just an example. Remember you can modify it to any folder your script is actually in.

After allowing the script permission to run. Simply use the below-mentioned command to run it. Make sure to modify the name of the script before you execute the command.

Why shell scripts are easier to run on macOS

If we compare it to Windows 10 Shell scripts are quite easy to run on macOS. It’s just because macOS is based on UNIX. As the system has in common with a Linux system. Shell commands will execute without issue or problem. Also, you can easily use a few apps Linux apps too as you like advantage more from a macOS model of them if they’re available.

We provided the example script to test the whole process will just show text in the Terminal. But the script you want to execute is going to do something quite different. Also, they might want other apps/utilities installed on your Mac before it can execute. If you’re good at writing shell scripts, then simply change the script you have and guide it to use apps or utilities that are installed on your Mac.

Here’s all about “Execute a Shell or .sh script on macOS”. Have you ever try to experience it? For further queries and questions let us know in the comment section below!