Customizing Windows UI (user interface) basically involves editing system files for example EXE, DLL, CPL, etc. You first edit the required file through Resource Hacker and then you replace the existing default system file along with your modified file. If you want to replace the default system file, then you need to take its ownership before replacing it. Most of the time you also need 3rd party software Replacer to replace the files easily and safely. In this article, we are going to talk about How to Use Latest Custom User Interface in Windows. Let’s begin!

But replacing system files is a very dangerous task. If you made a mistake during modifying the system file and you replaced the default system file with it. Then chances are your system will no longer boot and you will have no other option left except to reinstall Windows.

Most of the time we need to edit the “Explorer.exe” file. That is present in the “Windows” directory of the system drive where Windows is installed in your system. We might edit it to customize the Start button text in Windows XP or if you want to customize Start ORB look in Windows 7.

This method actually needs you to set a custom shell or user interface for Windows. You just need to edit a key in Windows Registry that tells Windows to use your mentioned shell program. Rather than the default Explorer.exe file when you log into Windows.

You guys might have seen many companies and cyber cafe having different shell when you log into your user account. They also use a similar technique which we are going to share in this tutorial as well.

So using this tutorial, you can not only use your customized Explorer.exe file without replacing the default file. However, also you can set any other program for example Internet Explorer, Mozilla Firefox, Notepad, Microsoft Word, or any 3rd party shell program as default shell or also user interface in Windows.

One more use of this tutorial you guys can found in Windows 8. As we all know Microsoft has added a new Start Screen in Windows 8 that replaced good old Start Menu in Windows 8. Many Windows 8 users are trying to find ways in order to skip this new Start Screen and directly boot into Windows Desktop. There are many ways like scheduling the launch of Show Desktop shortcuts on startup using Task Scheduler. However, all those methods are a waste of time because they need some extra time to open the shortcuts. You can better tap on Desktop tile in much less time.

So you guys can use this method to set different shell in Windows 8. In order to skip the Start Screen and then directly boot into that program.

Steps to Use Latest Custom User Interface in Windows

If you guys want to set a different program as Windows shell rather than default Explorer.exe, check 2nd step. 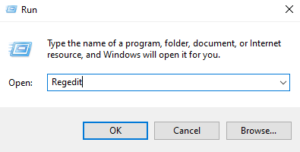 If you face problems after changing the shell or you want to restore the default user interface, then don’t worry about it. Tap Ctrl+Shft+Esc keys together to open Task Manager. Tap on File -> New Task option and then type Regedit and press Enter. It will then open Registry Editor. Now you can safely remove the Shell string value created in the step above. In order to restore the default Explorer.exe file as a Windows shell. Or if you modified the value of the Shell string, then restore its value to explorer.exe and restart your system.

Important: This tutorial will work for all of the Windows versions including Windows XP, Vista, Windows 7, Windows 8, and also Windows 10.

Alright, That was all Folks! I hope you guys like this latest custom user interface article and also find it helpful to you. Give us your feedback on it. Also if you guys have further queries and issues related to this article. Then let us know in the comments section below. We will get back to you shortly.

Also See: How To Fix Stuck Or Frozen Windows Update