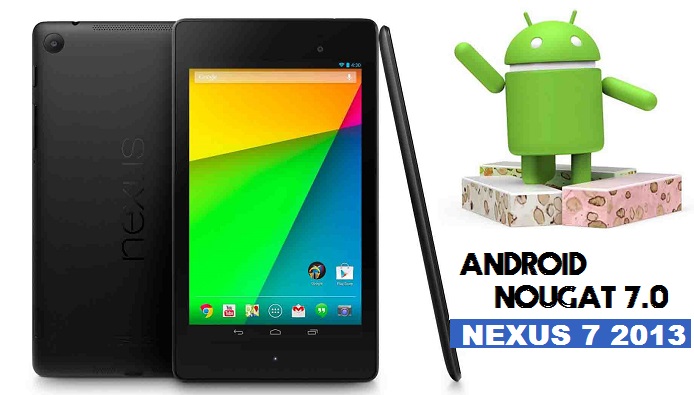 The Nexus 7 2013 is one of those devices that will no longer get Android updates, including Android 7.0 Nougat. However, that doesn’t mean your Nexus 7 2013 can’t rock the freshest release of Android.

Nexus 7 2013 has all the guts to run Android 7.0 Nougat without compromising on performance. And thus, folks over at xda have already begun development for Nexus 7 2013 ROM based on AOSP.

CyanogenMod 14 a.k.a CM14 is yet to be announced officially but since AOSP source code for Android 7.0 is now available, ROMs based on AOSP sources are making way to Nexus devices which didn’t receive the update officially from Google.

From now on you can install the stock ROM of Android Nougat from your own Advanced Recovery and with root access.

That is why we are going to provide the ROM and the installation process for you to install it from your customized recovery. It should be noted that it is already with root access, deodexed and with Busybox installed to improve its operation.

Well, to update our Nexus 7 2013  to the new version of Android that Google is deploying, we will need the help of a custom ROM. We will install it using the Advanced Recovery as per the TWRP Recovery example, with which we will execute the whole process.

2- Make a  Nandroid, if you do not like it you can easily go back to your previous version

Correct installation of Android Nougat on your Nexus 7:

We recommend:  How to Install a Custom ROM using TWRP Recovery

3- Turn off the device and enter fastboot mode by pressing the power button + the volume down button for 3 seconds.

4- Scroll with the volume button down to Recovery and select to start in Recovery mode.

6- Then depending on the recovery they have, in this case, I will do it in the Recovery TWRP Go to Install > And search and look for the .zip file of the Rom that they moved to their memory and flash it.

7- After finishing the process of installing the ROM, proceed to perform the same procedure previously done, but now flash the Gapps.zip

8- Once finished, they return to the main menu and perform a Reboot system now.

9- That’s it. Now the phone will reboot, and the first restart will take some time. After this, you can enjoy this new Rom based on Android Nougat 7.0 AOSP on your Nexus 7 2013.

How to Install TWRP Recovery on Pixel and Pixel XL