Today, we’re going to discuss the Kodi 17 Krypton best builds — we’ve made a list of best top ten builds, and we’ll guide you through each one of those to help you to choose the right one for you. Also, we confirm that they’ll all work and can be installed while time writing. Read the whole article carefully.

Use VPN To Stream Kodi:

If you want to find the best VPN for Kodi, you should meet the important criteria, each one essential to your online streaming experience.

What Do You Know About Kodi Build?

Kodi can be quite difficult to get up and running, especially for the newbies. It is the main reason that Kodi builds are rising in popularity. However, the idea of a Kodi build is to offer a full Kodi experience. It completes with the best add-ons, for about the similar amount of effort as it takes to download a single Kodi add-on. Some people find this idea good for pre-made builds to enjoy popularity in the community of Kodi. A build can ship with custom wallpapers, amazing UI adjustments, and all’s favorite streaming add-ons pre-installed so that the user doesn’t want to individually download and install each one. The main drawback of Kodi builds is to keep them updated. Also, it ensures that they’re compatible with your Kodi model and depending on the people who execute it to keep it updated.

Fortunately, all the builds on this list are working well on Kodi Krypton as of September 2017. So don’t worry about receiving them installed in the first place.

How To Install Kodi Build?

If you want to install a Kodi build, you want to install its repository. After you’ve installed its repository, then install the program add-on using that repository that contains the wizard setup for the build. After executing that setup wizard and again launching Kodi, you can then use your new Kodi build to its fullest potential. If you have Kodi installed on your system, I highly recommend wiping your pre-existing installation before downloading a Kodi build, or else the add-ons within might interfere with each other. 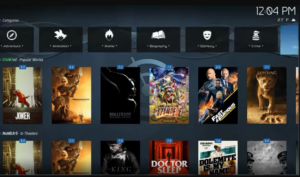 One of the best build for Kodi Kodi 17 Krypton is the CellarDoor TV Wizard. It is a solid solution for general IPTV streaming. Also, it is updated daily, and it becomes the best build for Kodi Krypton right now. It has been designed and developed in a smooth and professional-looking interface for easy navigation. Also, this build features the best Kodi addons. The fact that it is firm and well-organized. In short, you’ll enjoy your kind of entertainment shortly after downloading it on your Kodi device.

Another best build is ‘Smash 4K’. It is the build from developers who made the best Smash Repository. Smash 4K is used for general streaming, but as its name suggests, it is specialized in 4K streams. It is no doubt one of the best but is suggested for high-end systems only.

Misfits Mods is a strong, daily-updated Kodi build that seems to be a streaming powerhouse. Its set of add-ons are specifically best for streaming live sports, but the build can still do the best streaming too.

Kryptikz ZT is just like your typical streaming-oriented Kodi build, with one major difference. All skins of Kryptikz ZT are based on comic book superheroes. If you are not interested in that kind of thing, this build may be the best choice for you.

The Ares Build is maintained by those who are responsible for the Ares Repository. Not just this, but also it is one of the well-updated/well-organized Kodi builds out there.

Titanium is another premiere Kodi build from Titanium Builds. It’s generally potent, but the build is people based in countries where their native language is Spanish-speaking who want non-English content. Also, it has lots of add-ons for viewing kid-friendly material and sports. Also, it makes a fine family-friendly Kodi build.

The FireTV Guru build is optimized especially to make Amazon Fire TV. Also, it can be installed on other lightweight mobile devices.

This amazing build specializes in Live TV streaming. If you really like to watch as much live IPTV as possible, this is the best build for you.

The No Limits Magic Build isn’t obtrusive, but it’s the best choice that earned its place on this list for its utility or reliability.

The Wookie build falls occasionally behind on updates. But it’s quite fairly well-made when it does update. A more casual update schedule means that many add-ons don’t work well, though, so that the reason the lands Wookie is at the bottom of our list.

Here’s all about “Kodi 17 Krypton Best Builds”. Do you want to share anything else regarding this article? If yes, then let us know in the comment section below!