Hard drives are slowly being replaced with SSDs now. Unfortunately, SSDs have a limited life that is something that scares users from investing in expensive hardware. However, SSDs do have a limited life, it is still likely that you buy a new system before you have to replace your SSD. That said, it is still a great idea to keep an eye on your SSD health. In this article, we are going to talk about SSD Health check on Windows 10 – Tutorial. Let’s begin!

SSDs are gradually intruding into the HDD market and also replacing the role of regular hard disks in laptops and high-end desktops as well. Solid State Devices are offering high performance as compared to traditional spinning hard disks. This flash-based memory device is consuming less battery power to read and write data with really high-speed that guarantees more battery life for your laptops.

The SSD system will boot in seconds and also be ready to start work in seconds. If you have applications installed on SSD, the drive loads your applications faster and copies Gigabytes of data within just a few seconds. SSDs are offering high performance, high-speed, and as well as less power consumption. Since this is a new technology, still SSDs are lagging behind hard disks in terms of lifespan and reliability as well.

SSD health depends on how much data that you have written to it. You can write more than 500TB of data to an SSD before it fails. Some can last even longer, that actually depends on the brand you buy.

There are many tools, both paid and free, that tell you how healthy your SSD is. We recommend using Crystal Disk Mark, or giving Open Hardware Monitor a try as well. There’s another application called SSDLife which has a Pro and Free version but it seems the free version cannot be downloaded from the developer’s website. You actually  have to get it off Softpedia.

Download Crystal Disk Mark and then install it. Run the application and it will tell you the current state of your SSD. If the app tells you it’s ‘Good’ then you don’t have anything to worry about. In many cases, where the SSD supports it, you will also be able to see a percentage for its health and how much data that you’ve written to it so far. My SSD does not support it but it shows to be in good health as per this app. 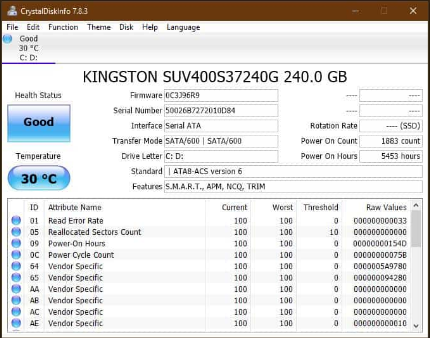 If you want a real benchmarking tool to test your hard disk, then Crystal Disk Mark is the right tool. This tool can test your Hard Disk in Sequential Reads or Writes, Random Reads/Writes, and QD32 Modes. You can also tweak the zoom ratio, and font scale, type, and face in the software as well. This actually makes it one of the most visually intriguing SSD health tools.

If you need to compare your SSD performance, Read/Write speed in random and sequential along with other manufacturers, or want to confirm your SSD is offering the same performance manufacturer specified. Then this is going to be the best open-source tool to check the disk or multiple disks based on their read-write performance.

Crystal Disk Mark also works on Windows XP or later and Windows Server 2003 or above versions as well. You can easily monitor the peak and real-time performance profile along with the software. If you are using Crystal Disk Mark in order to measure Network Drive, make sure to run it without Administrator rights. If the benchmark test fails on your SSD health check, enable the Administrator rights, and then run it again. 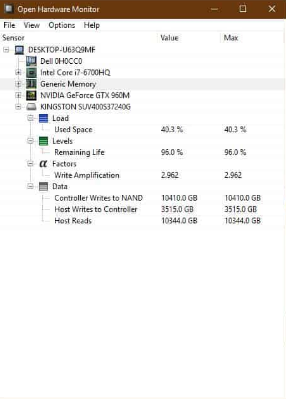 Download and then install Open Hardware Monitor. Run the application and expand your SSD from the list. Under Levels, the application will tell you how much of your SSD’s life is left. Mine has 96% of its life left but I have only had my SSD for a little over a year so it sounds to have depreciated more than is normal.

You can also buy SSDLife Pro, or you can try the free version from Softpedia. The Pro version is not very expensive so if you like the free version, then you might need to look at buying the full one. Download, install and then run the app. It will then tell you how your SSD is doing so far. The agreement is that mine is healthy.

SSDs help your system run faster and unless you’ve used one in your system, then it’s hard to explain or truly appreciate how great it is. The technology has improved and is still improving so if you’re not willing to invest in one now, then you should definitely consider doing so in the next coming years. They will be more affordable and their lifespan will also have improved. 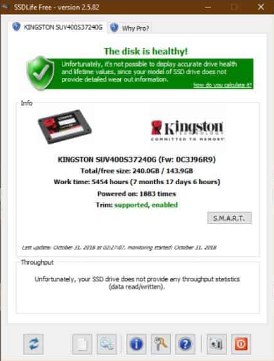 SSDLife is checked with most of the SSD drives in order to check compatibility. This SSD tool can also work with most SSD manufacturers like Kingston, OCZ, Apple MacBook Air built-in SSD. You can get comprehensive information like its total throughput, the amount of free disk space, and much more using the software. There is also a health bar in SSDLife as well. This visually represents the state of the SSD drive, and also it is an estimated lifetime.

The intuitive SSD diagnostic tool actually gives you access to all S.M.A.R.T. parameters too. But, the free version keeps reports only for 30 days and does not show S.M.A.R.T. attributes either. You have to upgrade to SSDLife Professional version for unlocking all the features.

The smartmontools package consist of two utility programs (smartctl and smartd) in order to control and monitor your hard disk. This tool is actually offering the real-time monitoring of your Hard Disk. Smartmonotools can analyze and also warn you about potential disk degradation and failure.

Smartmontools supports ATA/ATAPI/SATA-3 to -8 disks and SCSI disks and tape devices as well. This disk tool can run on Mac OS X, Linux, FreeBSD, NetBSD, OpenBSD, Solaris, OS/2, Cygwin, QNX, eComStation, Windows, and runs from a Live CD as well. The software also works perfectly with SATA drives under Linux 2.4 as well as 2.6 kernels for the SSD test.

You can also monitor your SSD status with Smartmontools easily. You may want to add a “-d sat” or “-d ata” option on the command line for smartctl. And you can also do it in the /etc/smartd.conf file. This will then help to treat the drive with a SCSI device name as an ATA disk. Likewise, the “-d sat” command instructs the software in order to assume a SATL is in place. This also makes it one of the most reliable SSD health tools for accurate readings.

Alright, That was all Folks! I hope you guys like this ssd health check article and find it helpful to you. Give us your feedback on it. Also if you guys have further queries related to this article. Then let us know in the comments section below. We will get back to you shortly.