You guys want to record lectures and interviews on the go? The good news is, you don’t have to use a full-blown computer to do a few basic or even moderate levels of audio editing or also create your own music. There are many different powerful apps for both Android and iOS in order to edit audio on the go. In this article, we are going to talk about The Best Android Audio Editor Apps You can Use. Let’s begin!

The Best Android Audio Editor Apps You can Use

If you are looking for audio editors along with a built-in audio recorder, then Dolby On is the one for you. It is actually a newly released app that has both of the tools, i.e, record (lossless audio) and edit. You have a preset that you guys can use relying on the type of audio that you want to edit. There are presets such as the lyric, natural, deep, thump, etc. Along with an option to tweak the filter intensity as well. 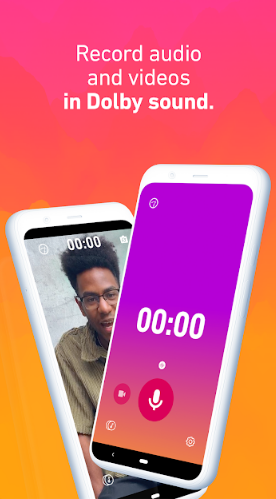 Other tools also include noise reduction, boost sound, 3 bands EQ, and also a trim function as well. You can also edit audio and use all of these features through just clicking and tweaking the level along with a single swipe. That’s not all, just connect your Soundcloud or Twitch, and then you guys are ready in order to publish it right away.

Price: The app is free of cost

WaveEditor for Android is actually a professional audio editing app that basically helps the users to edit, record, and master audio files with ease. The notable thing about this app is that it actually supports many audio file formats suitable for audio format conversion and media playback as well. It also offers multiple-track mixing and editing as well, MP3 or WAV recording formats, and also even visual tools to edit such as FFT, oscilloscope, spectrogram, etc. Further, the user can also import audio files in thirty different file forms however, can export to limited forms like AIFF, MP3, OGG, FLAC, PCM, and WAV as well. 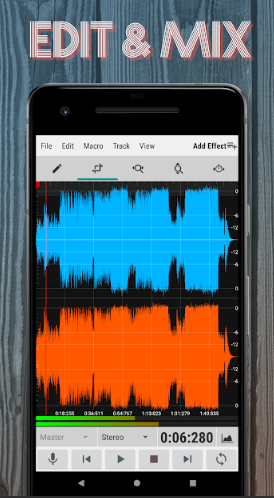 Plus, WaveEditor for Android also got a standalone and in-editor audio recorder. That lets users record audio even during the editing as well. The app has USB microphone support along with an in-built file browser to load and save files. The app comes with all the significant editing functions such as panning, zooming, and selection. Moreover, the user has the option in order to attach macro processes such as Reverse, Fade, & invert.

Price: WaveEditor is absolutely free on the Play Store and you can unlock all of the locked features for almost $3.99, plus you also get a recorder widget.

Mstudio is also another simple and best free audio editing app for Android that basically offers a minimalistic user interface along with some enhanced professional audio editor functionalities. It permits users to record, edit, merge, convert, mix, and also extract fragments of audio files and much more. Mstudio is best suitable for the folks who desire to create their music remix, mashups, and also even change the audio format, make ringtones, as well. 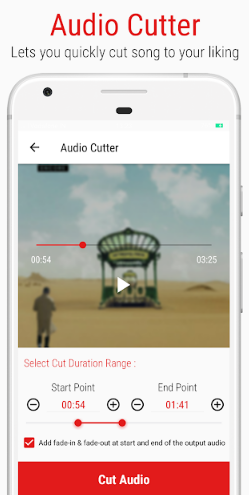 Not only this, but the application also incorporates advanced tools that allow you to adjust the tempo, tone, or add effects to your audio files. Plus, you can also delete audio from existing video files, amplify and even tweak the sample rate, channels bitrate, etc. Without even compromising the output quality.

All the processed files via sing this app are systematically organized in the saved files. So that the user will not have any difficulty whenever they see through menus and sub-menus in order to find any of these features. Apart from the above, the app also gives audio editing functionalities such as Mp3 PlayerMp3 Converter, Mutter, Omitter, and Splitter in one single interface. We can say it is an all-in-one tool that has everything that a user needs to edit their soundtracks such as professionals.

Price: The app is free on the Play Store as well.

Along with Voice PRO, you can record your voice or music in 100 different formats with more than 320kbps bitrate and more than 48000 Hz sample rate. In fact, you can even encode the audio file in 8 or 16 bytes and also register them in Mono or Stereo formats. Other features of the app include, however, not limited to backup and restore recording files from cloud services such as Google Drive, Dropbox, etc. Ability to add real-time background music to your recordings, mix and also merge recordings in any format. Ability to delete vocals, file conversion, support for encryption, call recording. Also has the ability to tag certain parts of the music, earphone control to micromanage background effects, as well. 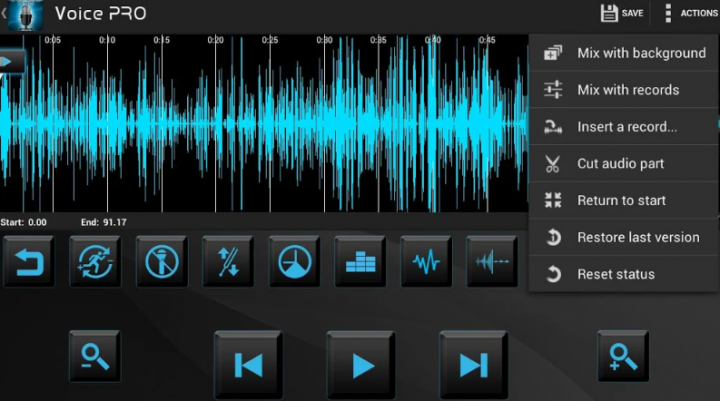 Plus, the app can also convert your voice records to text in 40 different languages as well.

Price: Voice PRO is actually a completely paid app ($12.99). However, thanks to the Google Play return policy, if you don’t really like the app, you can still return it within 2 hours from the time of purchase actually.

Of all the apps in this list, Audio Evolution Mobile Studio has actually some of the best features. That lets you do some advanced audio editing. With the included tools, you guys can do multitrack audio recording, perform basic actions. Such as move, cut, trim, and remove tracks, MIDI sequencing, sample rate conversion, latency correction, ability to import and export files in different formats, create separate audio files from different audio tracks, as well. Best of all, the app has also support for real-time background effects, virtual instruments, and every track in your audio file has its own controls to micromanage particular tracks as and when needed. 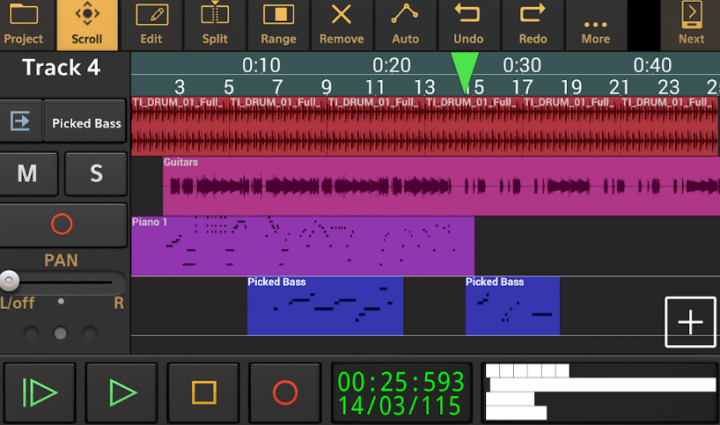 Audio Evolution Mobile Studio even has also support for external hardware. If you want to use the software in conjunction along with USB audio interfaces, then you can do so flawlessly. If you guys want to, you can even connect to a USB mic and record/edit audio files from there. But, this feature needs an additional in-app purchase.

Price: Just like Voice PRO, Audio Evolution Mobile Studio is a completely paid app too. You guys can also purchase the app directly from the Play Store for $6.99. The best thing is, there is a free trial available along with limited functionality. So that you can give the app a test drive before buying actually.

Lexis Audio Editor is also another best free audio editing app for android devices. That allows users to perform basic editing of audio or music files actually. Whenever a user looks at the Lexis Audio Editor, then the user interface will resemble somewhat like Audacity due to the waveforms, upfront options panel, and so on. In comparison to other audio editing apps listed in this post, Lexis Audio Editor not considered that powerful. However, can actually assure you that it would be undoubtedly helpful until your editing needs are simple as well. 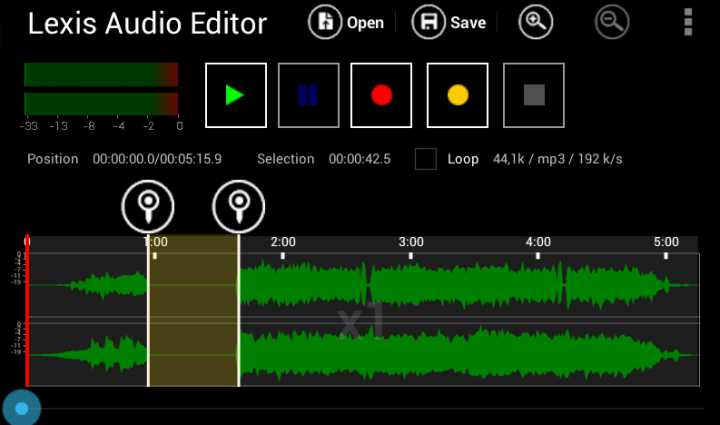 Such as cut, copy, paste, delete, trim, normalize, reduce noise, add fade-in/fade-out effects. With using this app, you can change the speed, tempo, and also pitch of an audio file and also mix the present audio file with another one as well.

Lexis Audio Editor App will not only permit users to utilize standard audio formats such as WAV, WMA, mp3, FLAC, m4a, aac, and so on. Even they can actually import video formats such as 3gp, mp4, and 3g2. It also has ten band equalizer and composer to customize your music or recordings further. Besides, the user can also save the edited audio files in their preferred audio format and send them to a friend as well. If your audio editing needs are simple, then we shall recommend you to try Lexis Audio Editor.

WavePad Audio Editor is actually one of the more advanced audio editing applications on this list. It has a lot of the basic features that you would expect, like clipping, trimming, cutting, merging, and so much more. However, in addition to that, you can do recording straight from the app. The ability to edit those recordings in the app, and then there’s a ton of effects. That you guys can edit and mesh into your audio files as well. You can also edit multiple audio formats, however, in addition to that. There are some particular amplifying, normalizing, and echo features, too. There’s a lot of additional features that you guys can add to WavePad Audio Editor. That will cost you some money via way of an in-app purchase. 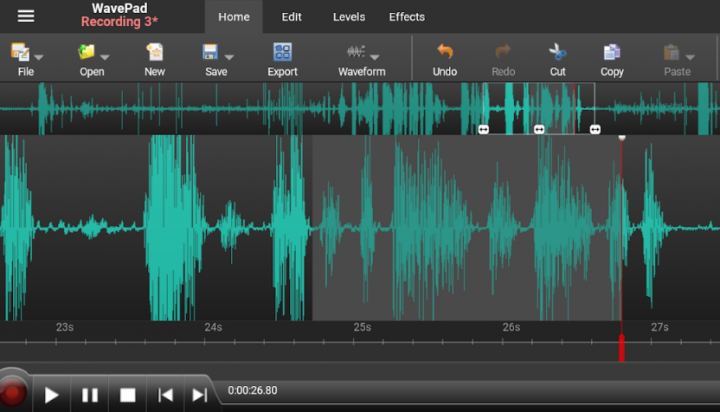 Price: The base version of WavePad is absolutely free. It is limited in terms of features and contains ads too. You guys can unlock individual features through in-app purchases or also buy the full version for $14.99.

FL Studio Mobile also lets you create and edit your own music through high-quality synthesizers, drum kits, sampler, and sliced-loop beats. You can also customize the layout of the drum pads and a virtual piano keyboard. Plus, you can further manipulate your recording or music through a wide range of included effects. Such as chorus, auto ducker, limiter, filters, delays, reverb, etc. Moreover, the app also lets you browse samples and presets when listening to the actual and proper previews. 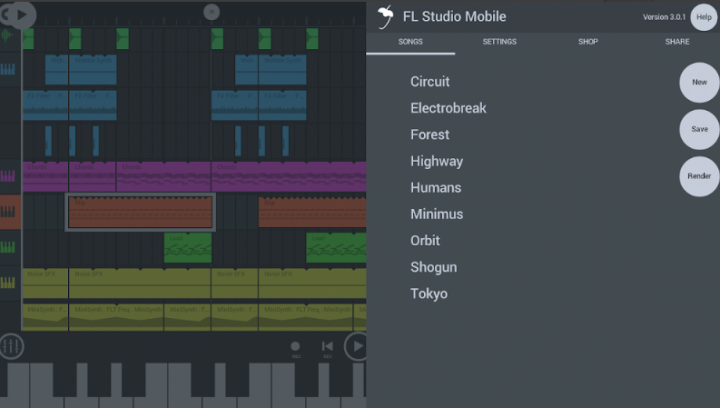 You can also even change the pitch of the samples and presets when previewing for better selection. Other options of the app also include but not limited to the support for MIDI controller support. MIDI file import and export, adjustable options, and also settings on a per instrument basis. Support for exporting audio files in both MP3 and WAV formats, step sequencer, as well.

Price: The app is basically priced at a whopping $15.99. Plus, you have to do in-app purchases if you want additional music content and synths. However, if you guys don’t like in-app purchases, you can always download those files from the internet and manually add them as required. Although the price looks a bit high, it is worth each and every penny considering all the options, user-friendliness, and customizability actually.

Alright, That was all Folks! I hope you guys like this “android audio editor” article and also find it helpful to you. Give us your feedback on it. Also if you guys have further queries and issues related to this article. Then let us know in the comments section below. We will get back to you shortly.