Music lovers, the good news is that you no longer have to set up expensive studios just to create music for fun. Well, today, there are a lot of music composer apps that are available in the market that can be used in order to create spellbinding music pieces. In this article, we are going to talk about The Best Music Composing Apps for Android. Let’s begin!

If you guys are a musician or someone that just starting out in the world of music, you can also make your smartphone your best companion in the process of making music as well. The music-making apps that are available today have all the features that you need to experiment along with your music composing caliber.

You guys do not need any expensive rack-mounted hardware synthesizers or a powerful PC in order to create good music. Your smartphone in your pocket is much more powerful than you actually realize. If you guys are a musician or just someone who just start to learn composing music. Then here are some of the best Android apps in order to compose music on the go.

Groove Mixer is just a simple application that lets you create drum beats. If you guys are into creating music beats, Groove Mixer is a really good app thanks to its user-friendly user interface as well. The app includes a pattern mixer, pattern sequencer, step sequencer, etc., to properly mix and also create music beats.

Price: The app is absolutely free and contains ads and in-app purchases. You can also remove ads by buying the pro version for $7.49.

In order to achieve a modern sound, you will need a pocket-sized rhythm station. Groove Mixer is a really great representative of drum machines that permits you to mix the musical rhythms of electronic music along with traditional instruments. 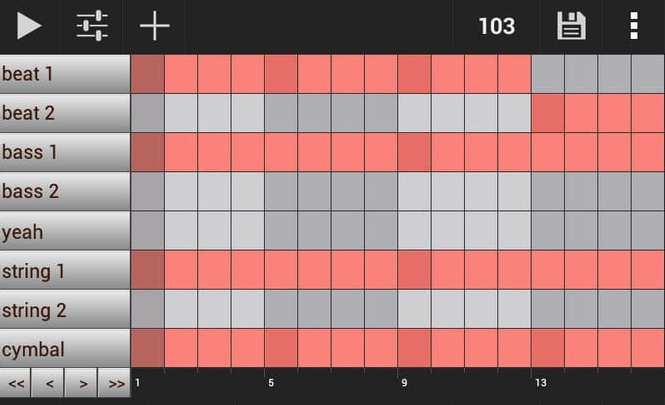 If you guys are a beginner or just planning to create your own music, the Groove Mixer is just perfect. The app does not limit your creativity and is actually designed to help you do what you want.

You’ll instantly learn how to work with the Groove Mixer and how you can load your existing pieces of music. Each and every music channel has a stereo mode, and you can set the playback rhythm as well.

In case you guys still have some difficulties, you can then visit the developer’s website. There you guys will find demo versions of other people’s tracks, instructions on how to create them, and much other interesting information.

Music Maker JAM is one of the most famous apps and has a ton of features in order to compose the music of your choice. The app has 300+ mix packs, remix tracks, and also thousands of studio-quality loops actually. Apart from composing and creating music, you can also record vocals to create songs. The best thing about Music Maker JAM is that controls for different instruments, effects, options are arranged in such a way that it actually makes it really easy to edit parts of a song or music.

After you create your music, you can also share them with the world and even submit them to global challenges. If need be, then there is a huge community of Music Maker JAM users to help you to start.

The app is free and it contains in-app purchases. 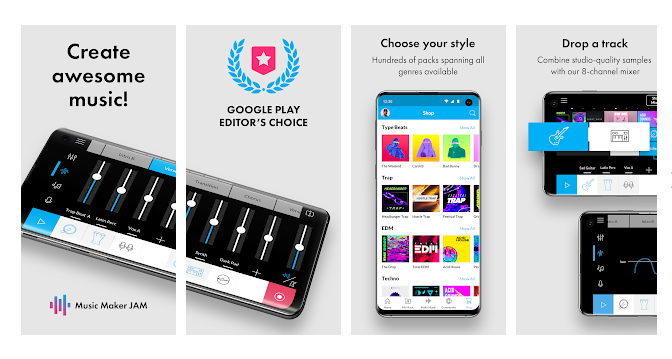 Music Maker JAM has an 8-channel remote control, that is used even by professionals. The music is actually created in real-time and you can also listen to what you are doing. By the way, the app even has a vocal that you guys can also use as well. Music Maker JAM basically works with all music styles, using more than 200 of them – techno, house, jazz, pop, and many others as well.

But, if you want to work on your own song, you also have that option. Music Maker JAM will also help you record your own voice or vocals, and then combine them along with background music as you go along. If you guys use the app at home, you can also share the result with friends on social networks too.

FL Studio Mobile is also another hugely popular app to compose, edit, and also mix songs on your mobile. What makes FL Studio Mobile special is its awesome user interface and also the number of tools and options you get to compose music as well. Some of them basically include built-in high-quality synthesizers, drum kits, MIDI controller, a built-in audio engine, mixer along with a wide range of options, built-in effects, a piano roll editor, presets with patchable previews as well 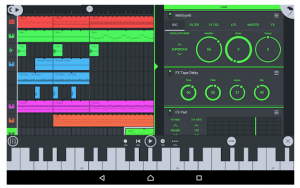 Price: The app basically costs you $14.99 and has in-app purchases for additional content.

Maestro is really similar to Score Creator app in that it also lets you create sheet music. The app is mainly aimed at songwriters and music students actually. Maestro supports multiple instruments such as Piano, Violin, Drums, etc. It also lets you compose in multiple tracks. When you need it, then you can playback the music you wrote. When you do it, you can even export it as an image as well.

Price: The app is free and also it contains in-app purchases.

It is ideal for students, composers, and songwriters alike, who mostly find inspiration at the most unexpected moment actually. With it, you can also create new music quickly and easily.

The application is really aimed at professionals because it uses special instruments. Such as, you will be able to use notes, beat patterns, lengthening dots, and much more when recording. 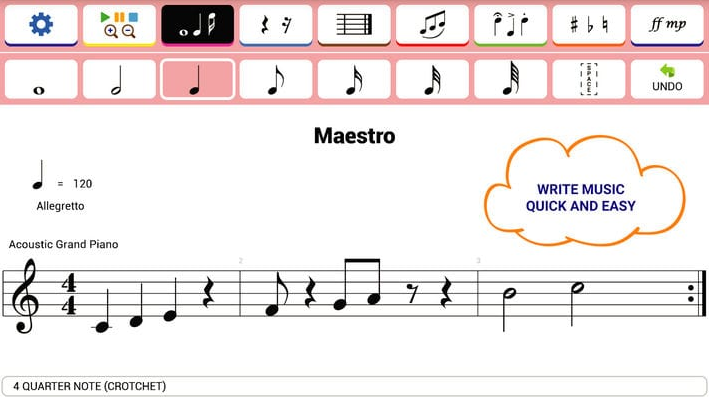 There’s also no need to draw them by hand – Maestro already knows what you actually need. All of the dynamics and playback will also be taken into account and you won’t miss a single thing.

Maestro can also work with more than a hundred different instruments, as well as using interesting sound effects too. If you guys want to add sounds of nature to your melody, all you need to do is to find the right sound in the catalog.

Walk Band has many virtual instruments such as Drum pad, Drum machine, Bass guitar, piano keyboard, etc. In order to quickly compose and create the music that you want. The user interface of the app is really minimal yet very beginner friendly. Each and every virtual instrument takes up the whole screen and gives you a lot of space to compose the music. Just like the name implies, when you have multiple friends to play with, you can actually perform like a band through selecting unique instruments for every user.

Price: The app is free of cost and contains in-app purchases.

If you guys are worried that you do not have your own band, now you guys can forget about such thoughts. Walk Band offers guitars, drums, basses, and many other famous instruments for free use. All sounds are realistic and you gusy can’t tell them from the real ones actually. 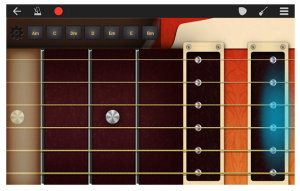 Every instrument represents in a separate Walk Band function. Such as, the keyboards show you the complete layout of the piano or synthesizer keys – there are actually a total of 5 programs for keyboards.

The guitars are also different actually, both acoustic and nylon. You can work in Walk Band in multi-channel recording mode and also add different sounds right during editing. If you are a professional musician, then you can connect a real MIDI keyboard through USB and transfer sound from the keyboard instead of the on-screen version.

As you guys can tell from the name, DJ Studio 5 is a virtual DJ Studio or turntable along with a wide range of features and tools. The user interface of the app is really good looking and ergonomically designed actuallty. DJ Studio 5 has actually two virtual turntables along with their own scratch engines and physics as well. 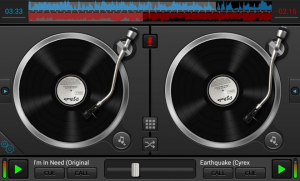 Other than that, you can also customize the deck also with custom skins, live record your mixes, edit or also re-order playlist. Also apply multiple sound effects as and when needed, loops, equalizer, ability in order to live sound spectrum, customizable sample pads, and much more than that. If you are into DJing or mixing sounds, then you should try DJ Studio 5. You won’t be disappointed as well.

The app is completely free and it contains ads as well. You can also ads and purchase deck skins through in-app purchases.

The application is convenient even for the most ordinary users. The simple interface does not cause any problems whenever you learn the functionality. And you will have the opportunity in order to feel just like a DJ.

There will be no watermark or restrictions on all of the tracks that you have made. You really get a new track, that is already on your smartphone. The application has a unique scratch-engine to mix sounds and music.

There are separate equalizers for every sound, and you can combine many soundtracks at once. Of course, you guys need a smartphone along with a big screen or tablet for more comfortable and efficient work as well.

You also need a multi-touch function – so that you can control the discs along with both hands. Even a beginner can feel just like the main DJ at a party with DJ Studio 5 installed on his or her smartphone actually.

Of all the apps shared here, Caustic 3 is really unique in that the user interface of the app that is inspired by rack-mount sampler rigs. It simply mean that when composing you’ll get to play with a lot of dials, slides, and buttons as well. After installing Caustic 3, you guys can create your own rack and add different machine such as FM synth, SawSynth, SubSynth, Organ, BeatBox, 8BitSynth, Modular, etc. No only you can add different machines however, you can set two effects per machine. On most of the machines in Caustic 3, you can also automate a range of things and even customizing the automation through changing the curves to meet your needs. 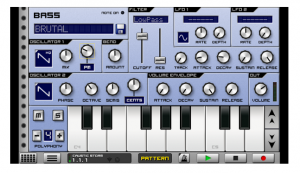 Price: The base app is free however, you cannot save your creations. In order to save your compositions, you havde to purchase the Caustic Unlock Key for $9.99 and then unlock the full version.

Audio Evolution Mobile Studio is actually decent mobile DAW (digital audio workstation). It has a lot of the needed stuff, that includes MIDI sequencing, multi-track recording and playback, looped playback, a metronome, latency correction, and all kinds of neat little tricks as well. Like most of  DAWs, it’s a little bit cluttered on mobile phones, even ones along with large screens. But, it is manageable to use.

The app basically goes for $6.99 up front with in-app purchases for extras if you want them actually. There’s a bit of a learning curve, however, it’s above average in this space. FL Studio Mobile is really good in this space as well.

Music Studio is basically a fully functional music making app that has a large range of production tools. The app features all conventional and modern musical instruments that you need to create and compose your heart’s content actually. Within the tracks section, you can also combine the different tracks and perform mastering and mixing of the songs as well. 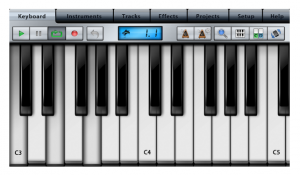 In the effects section, you guys can perform the touch ups to your songs as well. The app works best on iOS devices however, the Android variant is not bad at all too.

Alright, That was all Folks! I hope you guys like this “music composing apps” article and also find it helpful to you. Give us your feedback on it. Also if you guys have further queries and issues related to this article. Then let us know in the comments section below. We will get back to you shortly.

Also See: How to Link to a Specific Part of a Page HTML