Are you wondering to type the Indian rupee symbol? INR Indian Rupee brings a new symbol ₹, which was launched on 15 July 2010. Now you can find the symbol of rupee in Indian currencies or coins. Everyone adopted the new INR symbol.

Certainly, you might have Unicode display issues. If rather than of Rupee symbol, you are getting some other sign –it means that your PC is not yet Unicode enabled. You should turn on Indic language support just to be able to type in Indian languages.

Nowadays everyone wants to know how to type India Rupee symbol (₹) in PCs. However, this guides you with the Unicode and other strategies of writing a new Rupee symbol.

There are many ways to type Indian Rupee symbol in MS Word. Take your pick!

After using Windows 7 or Windows Vista, you want to install an update for this symbol so that the Rupee symbol is shown perfectly in MS Word. The download link to the update is here. 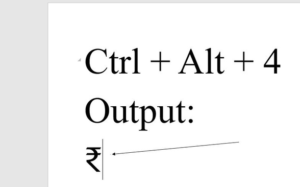 Some new keyboards have the Rupee symbol key, maybe beside the Dollar ($) sign.

Press Ctrl, Alt, and ₹ keys at the same time. When your keyboard is old or the ₹ symbol can’t exist then use the key “4”.

Don’t forget to set your keyboard to English (India) layout before trying this.

Hit the Right-Side Alt and ₹ keys together. It works with an English (India) keyboard layout setting.

The keyboard shortcut for input the ₹ symbol is Alt 8377.

Hit the Left Side Alt key and enter 8377 on your number keypad.

Charmap is known as Character Map. It is a Windows utility to view the font characters installed on the PC. You can simply find the Alt code to enter them and copy-paste the character.

Head over to Windows Search and enter Charmap to run the application. On the other hand, input charmap in Windows Run (move to the Start menu to find it) and hit enter to run it.

Then choose the “Font” to Times New Roman, Arial, Verdana or Tahoma.

Tap on the “Advanced View” option.

In the “Go to Unicode” input box, type 20B9 to highlight the Rupee symbol.

Choose and copy (Ctrl+C) it to your clipboard.

Then Ctrl+V or past it to your desired location.

How to Type Indian Rupee Symbol in HTML 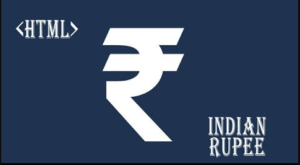 If you are a developer, you might want to write an Indian currency sign in HTML. Lots of developers still use a small icon image to show the Indian Rupee symbol. But you don’t want to do that because there is a Unicode available for Indian Rupee sign. If you wish to use this sign in a web page. Then the HTML code for this is ₹ (semi-colon is also part of the code). It is very simpler to type rupee sign in Unicode. Also, it saves the HTTP request.

How To Fix If Unicode Rupee Symbol Still Not Appearing?

Certainly, you might have Unicode display issues. Besides the Rupee symbol, you are getting some other symbols then it means that your PC is not yet Unicode enabled. You should turn on Indic language support to be able to type in Indian languages (in Unicode).

I think everything will work perfectly and you can easily type Indian Rupee symbol in Microsoft Word, Microsoft Excel, Notepad, and HTML without creating any issue. If you have questions or queries related to this guide then let us know in the comment sections below!