You are here: Home / Apps & Games / Ubisoft Apologizes for a Watch Dogs Legion promo in China

Its publication was taken as a support to the Umbrella Revolution of Hong Kong.

Again video games have had to be in trouble with censorship, bureaucratic or social. The latest news in this regard comes from a controversy generated following a promotional post by Watch Dogs Legion that was seen as a support to the demonstrations last Sunday in Hong Kong .

In the publication, you can see an image of the video game where the umbrellas are protagonists under the following message: “We do not know each other and we never met, but we defend the same goal and we meet here! It is time for us to recover our city [omitting the name] of London] and our future. “ 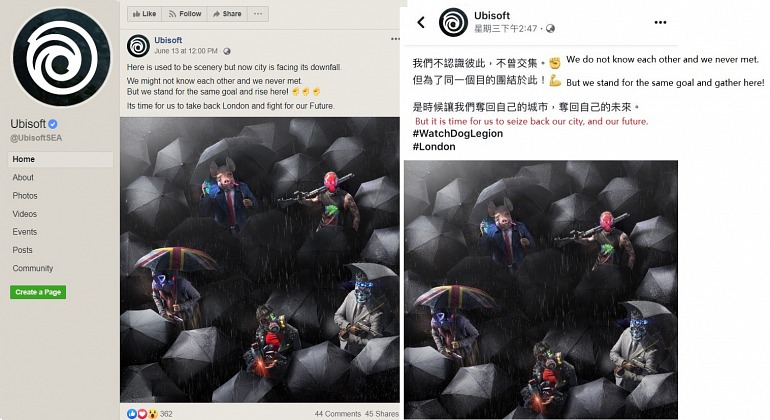 In Hong Kong, the movement that struggles to maintain certain autonomy and freedom of the Special Administrative Region against China is called the Umbrella Revolution , while the curious coincidence of the new manifestations, this post and the London omission of the phrase Promotional took the discomfort of some users, fact that forced hours later to apologize to the company.

“A post that promotes Watch Dogs Legion, the new fiction video game developed in London, recently shared may have been misinterpreted due to our omission of its setting in London, this was never our intention and we apologize for the confusion, ” they said from Ubisoft.

Also See:CD Projekt Red Admits that there Was No Combat Designer in The Witcher 3