We are a few days before the official presentation of the iPhone 11, Apple should send the invitations this week and everything indicates that we will have keynote next September 10. While the latest rumors say that the design might not look anything like what we have seen, an alleged leaked video of the device in operation has just appeared on the network.

The video has been published on the Chinese social network Weibo and from Slashleaks they wanted to share it with all of us. In the video you can see the supposed iPhone 11 with its three cameras inside a case, you can also see an iPhone 4 and an original iPhone on the table.

A video that seems… fake

You can’t really appreciate it since the video lasts just a few seconds, however, everything seems to indicate that it is an imitation device. Not only is no function test done, but we can barely see the system with three rear cameras. In addition, there seems to be a small cut between the second 4 and 5 that makes us think that we are facing one of the many dummies or models that we have already seen.

Already know many details of the new iPhone in November that Apple is preparing, including the name followed by the name probably go Pro. In addition to this, it is expected that this new rear camera system will be totally revolutionary with new photography modes. 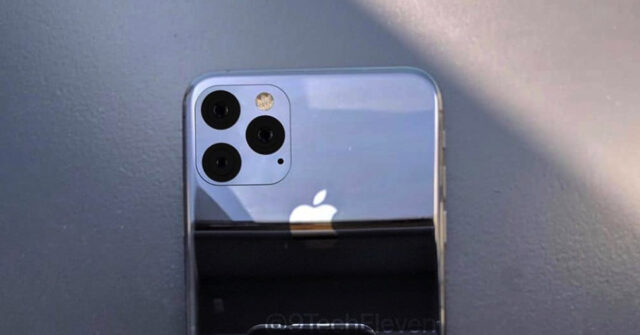 As for the design, everything indicates that it will be very similar, although new colors are expected to arrive and we may see a matt finish on the rear glass. In the front, we would have a notch that would come along with the second generation of Face ID, which will have better viewing angles.

Also see: All the news that comes with iOS 13.1 beta