Windows has tons of system programs or EXE that are not known to many. But, the Windows Task Manager does show a list of programs using resources on your computer as well. One of the programs that actually caught my attention was LockApp.exe. Most of the time, I had seen it consuming a lot of resources, and sometimes it does not. When I looked around a lot of forums, it seems to have sometimes consumed like 35% resources, and even GPU usage as well. In this article, we are going to talk about what is LockApp.exe, and what you should do in case it looks suspicious. Let’s begin!

You may also see a process named LockApp.exe running on your PC. This is actually normal. LockApp.exe is a part of the Windows 10 operating system and is also responsible for showing the lock screen.

Specifically, LockApp.exe shows the lock screen overlay that appears before you even sign into your PC. This screen shows a pretty background picture, the time and date, and any other “quick status” items you choose to show on your lock screen. Such as you could display weather forecasts or information about new emails here.

The LockApp.exe process displays the screen and all the information on it.

This process is not doing any work most of the time actually. It only does something when you are at the lock screen as well. This appears when you are signing into your PC, or if you lock your PC by tapping the “Lock” option in the Start menu or clicking Windows+L. It suspends itself and stops working after you sign in actually.

In fact, we could only get a screenshot of LockApp.exe running on the Processes tab in the Task Manager. Through using a geeky trick to open programs on the Windows login screen. You mostly won’t see it at all in this list, although some system tools may inform you that LockApp.exe is running on your PC.

Use Much System Resources or not?

The lock app does not use a lot of system resources. If a system tool tells you that it is running for a long time, that means your PC was locked and also awake for a long time. The PC was sitting at the lock screen, so LockApp.exe was running. And, after you sign into your PC, then the lock app automatically suspends itself.

We also noticed the lock app used only 10-12 MB of memory at the lock screen. CPU usage was very low, as the app does not need to do much. After we signed in, LockApp.exe suspended itself and used only a tiny 48 K worth of memory. You will see this information on the Details tab in the Task Manager.

This process is designed to be lightweight and also tiny. If it does appear to be using a lot of CPU, memory, or all other resources, you have encountered a significant bug in Windows. That should not happen.

Is the LockApp.exe process safe?

As of this writing, there are actually no complaints of viruses or malware masking themselves as the LockApp.exe process. But, you should know that such a scheme is possible. Criminals can imitate legitimate system processes to let their malicious programs blend in actually.

So, if you want to make sure that the LockApp.exe process in your computer has not compromised. We also recommend checking its details in Task Manager. In order to do that, follow these simple steps below:

If you notice that the LockApp.exe is located in a different folder, then there is something suspicious about your PC actually. In this case, we recommend you to use Auslogics Anti-Malware. This program will scan your system and then look for malicious items and all other security issues.

Can you Disable It?

You can also disable the lock app if you like. This will then remove the lock screen from Windows. In other words, when you boot, wake, or also lock your PC. You will see the regular sign-in prompt without the first empty lock screen.

Turning it off the lock app won’t save a noticeable amount of your PC’s resources. It will let you sign into your PC a bit more quickly, however, you won’t see that lock screen anymore. You will still see the typical background picture on the sign-in screen.

How to disable LockApp.exe in Windows 10?

If you want, you can disable the LockApp.exe process. When you perform the steps below, then you will only see the regular sign-in prompt without the background picture or ‘quick status’ items. 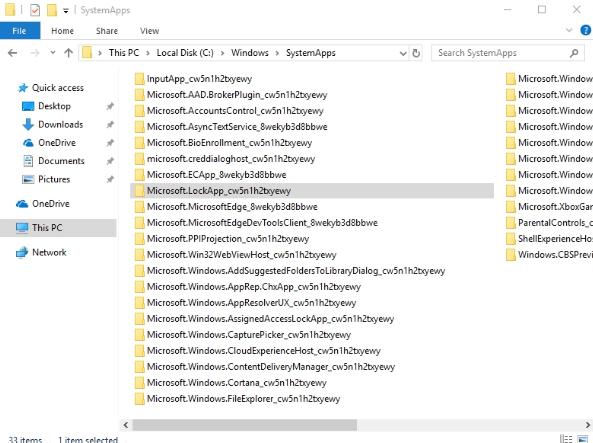 Also See: Why is rundll32.exe Running on Your Computer – What is it?