An Ethernet port is known as a jack or socket. However, it is an opening on PC network equipment that Ethernet cables plug into. It is designed to plug wired network hardware in an Ethernet LAN, metropolitan area network (MAN), or wide area network (WAN).

Important: The pronunciation of Ethernet with a long “e” as in the word eat. Ethernet ports pronounce by other names also, like LAN ports, Ethernet jacks, Ethernet connections, LAN sockets, and network ports. 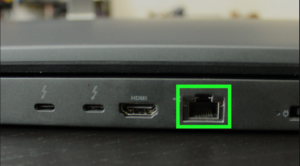 Ethernet ports are found on the back of a PC or the back or side of a laptop. A router might have many Ethernet ports to accommodate different wired devices on a network. Also, it is true for other network hardware such as modems or hubs.

An Ethernet port is bigger than a phone jack. Due to its shape, you can’t fit an Ethernet cable into a phone jack, which makes it’s quite simpler easier while connecting in cables.

Ethernet port is a square with some rigid areas under it. Also, the cable is built in a similar way. It has a clip to hold the cable in the Ethernet port.

Laptops also have Ethernet ports, too, just to connect to a network that lacks wireless capabilities. An exception is the MacBook Air, which lacks Ethernet ports but can support connecting an Ethernet dongle to a USB port on the PC.

If your PC encounters internet connectivity problems, the Ethernet port is the first place to look. 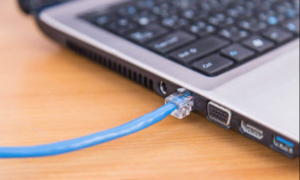 Here are some causes of connectivity problems:

All popular broadband routers feature many Ethernet ports. Using this setup, various wired PCs in a network can reach the internet and the other attached devices on the network.

An uplink port (also known as WAN port) is an important Ethernet jack on a router that plugs into a broadband modem. Wireless routers add a WAN port and typically four extra ports for wired connections.

Other kinds of consumer gadgets (such as video game consoles, televisions, and digital video recorders) add Ethernet ports for home networking. Another instance is Google Chromecast, for which you can purchase an Ethernet adapter so that you can use Chromecast without Wi-Fi.

That’s all about it. What do you know more about it? If you want to share any other method or tips regarding the article then let us know below. For further queries and questions let us know in the comment section below! 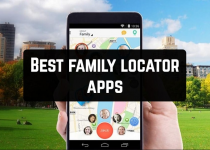