Some PC users are facing the Netflix error U7353-5101 whenever they are trying to view a movie or TV show that was previously downloaded locally. Well, the issue looks seems to be specific to the UWP (Universal Windows Platform) variant of Netflix (the one you download from the Microsoft Store).

After examining this particular issue thoroughly, it turns out that there are various causes behind this error code. Come let’s check few causes that are responsible for this error code:

Also See: Hola not Working For Netflix – What to do 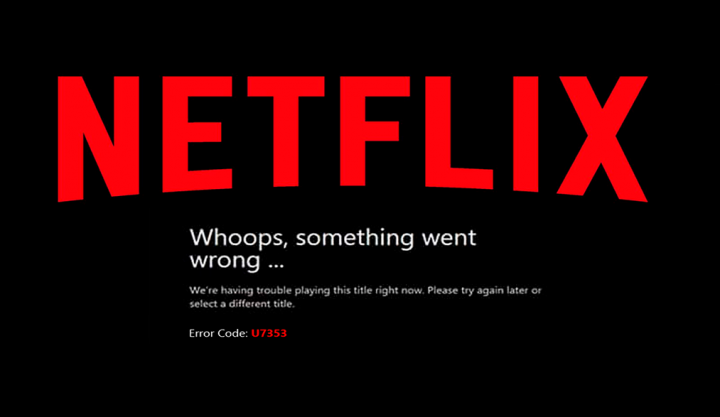 Here are different ways to fix the Netflix error:

The error occurs whenever you’re trying to play Netflix content that was downloading or installing locally with an outdated Netflix UWP version.

The issue occurs in situations where the involved PC can’t connect to the Wi-Fi so the Netflix UWP build could not be updated. Whenever it occurs, Netflix will ‘lock’ the offline playback feature on it for the purpose of security.

If that’s the case, you can easily resolve the issue after forcing the new Netflix UWP update to install on your computer.

If you want to do this on Windows 10, follow the steps below to use the updating function on the MS Store to update to the new Netflix UWP build:

If you still view the same Netflix Error U7353-5101, dive down to the other solution below.

When you update the Netflix app to the new build didn’t work for you, the other reason behind the error is a corrupted temporary file or a cached file.

To do this, follow the steps below to use the Apps & Features menu to reset the Netflix app:

In case you’re still facing the Netflix Error U7353-5101, dive down to the other potential solution below.

Also See: How Do I Watch Netflix Impractical Jokers

If the above solution reset didn’t do the job for you then don’t fret. Your next try to fix the error code U7353-5101 is to uninstall the whole Netflix UWP installation.

Follow the steps to reinstalling the Netflix UWP app:

In case the issue (Netflix Error U7353-5101) is still not fixed, scroll down to the other potential solution below.

If none of the above solutions worked for you, there is one potential solution that many users have successfully used to get around the issue. Whenever it occurs, the U7353-5101 error code can also occur because of a DNS (Domain Name Address) inconsistency.

Many users fix this issue after flushing the DNS cache from an elevated Command Prompt. As it’ll end up resolving every instance where this issue is caused by a bad DNS range. However, it ends up affecting communications between your Netflix servers or PC.

If you want to make things simpler for you, follow the steps below:

When you’re inside the elevated Command Prompt, input the following command and then hit Enter to flush the DNS cache:

Note: After flushing your DNS cache, you’ll then end up erasing every bit of info regarding the DNS cache. This operation will end up forcing your router to assign new DNS information.

To fix the Netflix error you can clear the cache & cookies:

I hope you can now understand how to fix the Netflix error. If you want to share any other alternative method ten let us know below!