Do you want to add location in Snapchat? For those who are not aware of Snapchat, here is a brief intro for them. Snapchat is a very popular messaging app launched by Evan Spiegel, Bobby Murphy, and Robert Brown. The app has over 170 million users from all around the world with 200 million pictures shared on regular basis using it. It enables users to share images and videos with their known ones. The main cause behind Snapchat’s huge growth lies in the concept that multimedia texts can’t accessible after a time limit. Snapchat is very popular on iOS or Android.

Well, the snap stories can take effort, time, and the best stickers to make. Snapchat not only loads of stickers, both animated or static. They feature Bitmoji, emoji, and your location. The new stickers include location tagging and basically enables you to tag a nearby location in your Snap. Come let’s check how to use them. 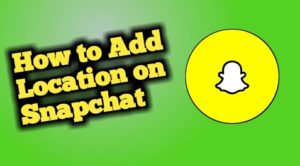 Head over to the Snapchat and take a Snap or record a video Snap. You can also make other edits to the snap that you like to apply a text, filter, or anything else you want to do to. If you want to add a location in Snapchat, click the Stickers button in the column on the right.

From the stickers drawer, click the Location and move through the list of the nearest locations that Snapchat finds. Then click the location you want to add and it will be added to your Snap.

You can also share the Snap to your loved ones or post it on your story. The location sticker will enable you Snaps to display the Snap map as well. Also, it goes without saying but you want to provide the app access to your location if you want to use this feature.

Make sure not all nearby locations might show up. Maybe the feature has a small radius when it comes to searching nearby locations. Also, it appears to cover a few miles then it’ll miss locations that display on your Google Maps. Not just this but also it uses map data from Mapbox and it looks that it isn’t as rich in data as Google Maps is. The feature might be the best but the restricted map/location data might put a dent/hole in it.

Tag Location To Your Friend:

If you want to tag your current location in Snapchat, that is impossible. Only a few places that are recognized by the app. For example, gyms, restaurants, hotels, etc., can be tagged. The location feature seems a little bit buggy. During tests, the sticker can list different locations at first but after a few minutes when another snap was taken in the same location, you can then find one location that could be tagged. It’s likely a map data issue.

Snapchat hasn’t been too reliable with locations. Snapchat users can only be able to use filters to add a city filter and the Snap map can also display your areas where there is lots of activity but unfortunately, it isn’t that reliable.

I hope this article helps you to learn everything you wanted to know about the Snapchat location feature. If you have any issues or queries then let us know in the comments section below.