Wireshark Android Alternatives: Wireshark is the amazing and most popular free and open-source packet analyzer. It can see all the network communication going in and out of all the computers in the network. Like those who use Wireshark can see anything on your network that’s not encrypted. But unfortunately, it is not available for Android. But, it doesn’t mean you cannot track, monitor or capture network packets on your Android device. Here are some of the best Wireshark alternatives for Android to monitor traffic and capture packets. 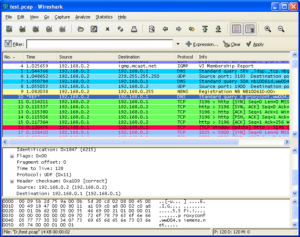 Why most network sniffer app on Android needs Root access?

Before we proceed further you should know, some Wireshark alternative for Android requires ROOT access to capture packets. The reason being the promiscuous mode or monitor mode.

While running a packet sniffer tool in promiscuous mode, you’ll see every packet that is being transmitted over the network. If it is not separately encrypted, all traffic can be read. 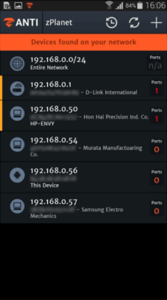 zAnti is not just a simple network sniffer. It is a complete penetration testing tool for your Android device. You can do complete network testing and a lot of other tests with a simple click on a button. Those things you can do with zAnti include but not limited to modifying HTTP requests and responses, exploiting routers, hijacking HTTP sessions, changing MAC address, checking target device for vulnerabilities, etc. Except for this, zAnti can also find security gaps within your existing network and gives you detailed reports on how to fortify the defenses to protect your network from possible attacks.

This penetration testing tool is specifically designed for professionals and businesses. zAnti needs root access to work. Moreover, most of the advanced features of zAnti to work, the app will change a few SELinux configuration settings and also puts your device into permissive mode.

Pricing: The app is free of cost and you can download it from the official website by submitting your email address to get the download link. 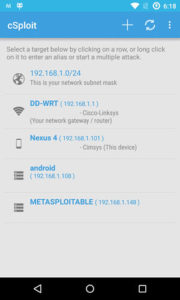 cSploit is very similar to zAnti as it is a complete and professional penetration testing tool for advanced users. You can think of cSploit as Metasploit for Android. Some features of cSploit include:

When it comes to network-specific tools, cSploit enables: 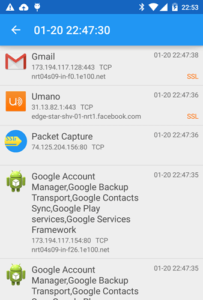 Packet Capture is a dedicated application to record and capture network packets. Using this tool you can’t only capture and record packets but you also decrypt SSL communication using MITM attack. As it uses a local VPN to capture and record all your traffic. Make sure it can run without any root permissions. If you are searching for a simple and straightforward packet capture app then try Packet Capture.

Packet Capture is not difficult simply install it from Play Store and launch the app. When you install, you’ll be prompted to install an SSL certificate. While recording and capturing HTTPS traffic then you need to install the SSL certificate. Depending on your requirement, either click on “Install” or “Skip” to continue. Make sure that if you don’t install an SSL certificate, some apps might not be able to connect to the internet when you are using Packet Capture’s local VPN.

On the home screen, click on the “Play” icon appearing in the upper right corner. The action will start the local VPN and all your traffic will be automatically tracked and recorded.

Pricing: The app is completely free (same as above) but contains ads. 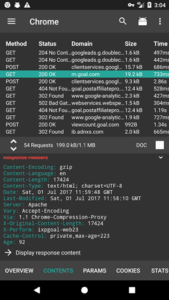 Debug Proxy is the same as Packet Capture. Just like Packet Capture, it can also capture traffic, monitor all your HTTP and HTTPS traffic, decrypt SSL traffic using MITM technique and view live traffic.  It has a user-friendly interface. It is very intuitive and captures all packets in native code that makes it fast and responsive. Except that Debug Proxy also gives access to other tools that let you do bandwidth throttling, HTTP response and latency testing, network security testing for MITM attack vulnerabilities, web debugging, SSL monitoring, etc.

To use Debug Proxy, install it from PlayStore and launch it. On the intro screen, you will be prompted to install the SSL. Install the certificate if you want to decrypt SSL traffic. On the main screen, click on the “Play” button to start capturing traffic. By default, Debug Proxy will capture traffic from all apps. But if you want to capture traffic of a specific app, then click on the “Android” icon in the upper navigation bar and choose the app you want to log or monitor.

Pricing: Its base app is free but you want extraordinary features then you’ve to update in $3  via in-app purchase. 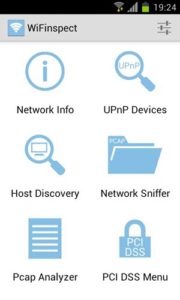 WiFinspect is another free and powerful packet that captures a network sniffer. Features of WiFinspect not limited to:

If you are searching for an app that does much more than capturing packets and not a full-fledged penetration testing tool like cSploit or zAnti then WiFinspect is for you. 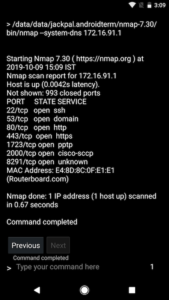 Nmap is a popular open-source network scanning app for PC. It is available for Android. The important thing is that it works for both rooted and non-rooted Android. You obviously get more functionality in Rooted Android smartphone.

Nmap is not directly available on the Google Play store or even on its official websites like most other apps on the list. Besides, you’ll have to compile it by running a few commands either using ADB or using a third-party terminal emulator like Su / Root Command. If you get permission denied during the installation, then note that you’ve given the whole Nmap directory.

Hopefully! this guide is helpful. But if you think that I miss any of your favorite apps then let us know in the comment section below!

Also Read: How to Fix Bluetooth Missing Issue in Windows 10