Insert Degree Symbol on macOS: Recently a reader asked about how to use the degree symbol in macOS (OS X). Typing a degree symbol on your Mac in macOS is just as quite easy as on your phone using iOS. It lets you appropriately express both mathematics and the increasingly unpredictable weather.

Also, there are two ways to type a degree symbol in macOS. They’re both system-level functions, like that they’ll work flawlessly in any application on your Mac at virtually any time

Note: They work well with some exceptions for secure text entry fields.

But don’t worry, all of the applications in which you would want to type a degree symbol are supported. Including Web browsers, macOS Messages, Skype, Mail clients, and even journaling apps like the popular Day One.

You can also insert a degree symbol (among other symbols) by using the Special Characters menu. As it is now called the Emoji & Symbols menu in some recent versions of macOS, including macOS Mojave.

To access it, hover your cursor where you’d like to insert the degree symbol and then go to Edit > Special Characters (or Edit > Emoji & Symbols) in the Menu Bar. Also, you can use the keyboard shortcut Control-Command-Space on your Mac’s keyboard.

A new window will appear showing a huge range of special characters i.e symbols, and, for Yosemite, Emoji. Besides manually browsing the lots of available symbols, just enter “degree” into the search box to show the available degree symbols.

As noticed in the screenshot below you have a choice of three-degree symbol options. One each for degrees Fahrenheit and Celsius, also a plain degree symbol. Simply double-click your symbol to insert it at the current position of your mouse or trackpad cursor. Sometimes used symbols and characters will appear under the search box, saving you a bit of time in the future. 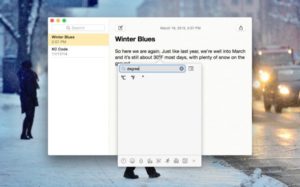 The Special Characters menu explained above gives you hundreds of useful symbols, characters, and emoji from which to select. Also, if you just require a plain degree symbol, it’s not your instant option. Instead, let’s use a keyboard shortcut.

While typing, hover your cursor to the position at which you want to input a degree symbol. Then, use one of the following keyboard shortcuts:

We’re not sure if there’s any meaningful difference between the large and small degree symbols. But when used in mathematical and meteorological contexts, using either will likely get your point across. Also, using the Special Characters menu approach explained in the section above, the larger degree symbol is inserted.

Here’s all about the insert degree symbol on macOS. For further queries and questions let us know in the comments section below. Also, drop a comment if you want to share anything else.