Battery service warnings on your Mac/MacBook can turn up suddenly and unexpectedly. Even if your precious laptop has only been out of the box for a few months. This is one of the most dreaded alerts a MacBook user can ever see.

Also, if you go to the Official Apple support community page. The concern and complaints are mostly about software updates. A bug, poor battery management, and maintenance, strange battery performance, or simply the need to replace the battery itself. For all of the laptops, a battery is the most expensive component. It is also a component that essentially can’t be serviced. 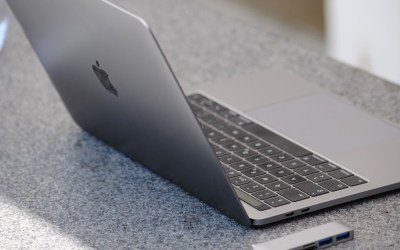 When a lithium-ion battery is done, it’s done. And when that happens you either need to replace the battery or you need to keep your Mac plugged in at all times. Well, which kind of defeats the purpose of having a laptop in the first place. What exactly are your options when your MacBook returns the Mac Service Battery warning?

In this article, I will tell you how a lithium-ion battery works on the MacBook. How to get the best performance and longest life out of your battery. I will give you some suggestions on ways to resolve the Service Battery alert. So, that does not require you to pay a lot of money for a new battery pack.

When we connect the battery to an electrical circuit that draws power. The electrons flow from the anode to the cathode, creating a current. 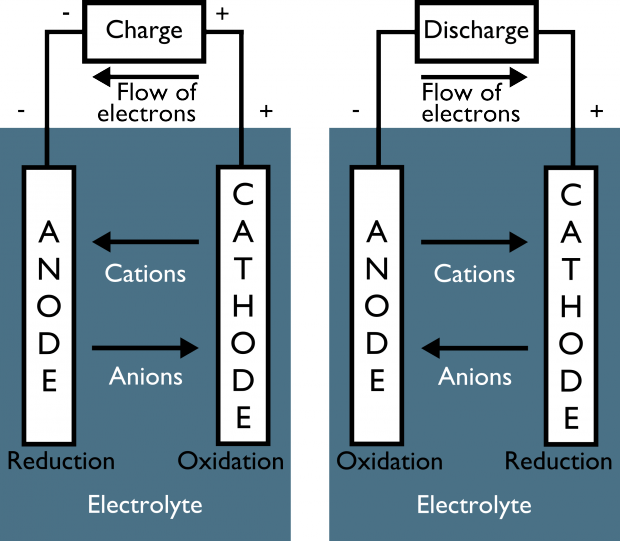 If a battery is rechargeable, then this flow can be reversed. When a current is passing through the battery, electrons flow from the positive to the negative electrode, recharging the battery and adding power to it.

In a lithium-ion battery, the positive electrode is usually made out of lithium-cobalt oxide (LiCoO2). Newer batteries use lithium iron phosphate (LiFePO4) instead. You ever hear news stories about lithium batteries exploding or catching fire. Those stories are true; this type of battery is subject to overheating and exploding. And If they are not carefully monitored. As battery technology has developed.

There are many variations in this basic battery design. And with different designs producing different power outputs, reliability levels, and so on. The main factor we are looking at today is the charging life cycle of the battery. That is, how many times can the battery be discharged and then recharged before it no longer functions at full capacity.

For lithium-ion batteries. The number of cycles before this happens varies widely. It depends on the quality of the battery build and the level of discharge that the battery supports.

What to Expect from MacBook Batteries:

The batteries in your Mac follow the same physical laws as all the other applications for lithium-ion batteries. Laptops don’t draw a whole lot of power. They are generally designed to optimize their power consumption. with those two facts in mind. That a typical recent MacBook or MacBook Pro can run for about 10 hours of using the Internet and doing normal computing tasks like word processing or playing music. However, older Macs generally run for about 8 hours on the battery.

Recently Apple states that its new batteries are designed to support 1,000 full charge-discharge cycles. After which the battery should still have 80% or more of its original capacity. Note that even after this long life-cycle, Your battery will still work. It just won’t have the same ability to hold a charge as it did at the peak. You have to keep that in your mind that the macOS is quite intelligent when calculating cycles. And if you discharge your battery a bit and then charge it back up. That will only count as a fraction of a cycle for its internal monitoring.

Does Mac Battery need to replace?

Your mac always monitors the battery. It uses its original capability as a base. And if you go to your battery icon on the status bar at the top of your screen. Here a popup will display the battery status. the remaining power. And also a list of apps that are using that large amount of service battery in your mac.

The battery status messages are four in quantity:

What Should I do when my Mac Says Service Battery?

If you a Mac that is older than 2010  then you may only have 500 cycles available before your battery’s worn out. But Modern Macs get at least 1,000 cycles.

How Do I change low Battery Warning on Mac:

If you get the Mac service battery But if your cycles are relatively low, then there may be other issues at play and you should use the methods I’m about to describe. I’ll show you how you can attempt to resolve the issue yourself. Before you spend replacing the battery outright. Service Battery warning on Mac. the cycles are above about 1,000 for a newer Mac (post-2010) or about 500 for a pre-2010 Mac, then your battery’s likely pretty close to worn out.

So First of all, you have to reset your System Management Controller (SMC). That is a hardware chip that controls some hardware settings. Which also includes the power system. This process is straightforward. But any customizations to your power plans or hardware settings may also be reset.

SMC controls the computer fans, backlights, and indicator lights, as well as some aspects of the display, ports, and battery. So resetting it will force your MacBook to revert back to its default settings for all these things. If a transient issue in the SMC was causing the Service Battery warning, this should address it.

Battery recalibration takes a day or so. So if possible, I recommend you to do it over a weekend when you don’t have to have your MacBook for work.

Here are the ways to recalibrate your MacBook’s battery:

Note: Click on the battery icon in the upper-right and select “Battery Percentage” from the pull-down menu for easier battery percentage monitoring. 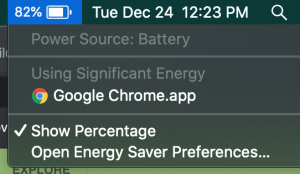 In addition. If you notice that the macOS battery indicator now gives a more accurate reading of the battery’s status – no more surprise losses of power.

How to Extend your Mac’s Battery life?

If you plan to keep your Mac in service for a long time, then keeping your battery in top condition ought to be a priority. It’s the component that is the most likely to go out and need a replacement. Now I am gonna show you some suggestions to keep your Mac service Battery healthy:

Keep your Mac plugged In:

Well, It feels great to sit with a MacBook on your Lap out. Surf the web or write your novel while you enjoy the sunset. The whole point of a laptop is that it’s a portable machine. However, there are many times when you have it sitting on a desk like any other computer. When using your Macbook not plugged into power, try not to let your battery get much below 50% before plugging it in again. That will reduce the number of times your MacBook has to charge and extends its life.

Avoid to Expose Your MacBook on Extreme Temperature:

Heat is another story; temperatures higher than 95° F/35° C can permanently damage the battery and reduce its capacity. Charging in high temperatures will definitely cause additional damage.

Your MacBook’s software should prevent charging in these extreme environmental conditions. But it’s still a good idea for Mac owners to be aware of the temperature parameters. MacBooks work in a wide range of outside temperatures. But 62° F to 72° F (16.5° C to 22° C) is the ideal temperature range. Your machine will work just fine in cold temperatures; though your battery won’t last as long, it won’t be damaged by cold.

However, charging your battery in sub-freezing temperatures is very dangerous. So, never charge a lithium battery in the cold.

Store Your MacBook At 50% Charge:

If you are planning to keep your MacBook stored over a long period of time (more than two weeks or a month). Then you have to charge it to about 50% of capacity before doing so.

If you leave it stored at full charge, it can cause you to lose capacity, While leaving it stored with no charge can cause it to lose the ability to charge at all.

If you store the device for more than six months. Then you should power it back up and recharge it to 50% again every six months. Also, You should store your MacBook in a dry environment where it will not exceed 90° F/35° C.

I hope this article is good enough to solve your Mac problem of service battery. Do you know of any other ways to get rid of your Mac Service Battery Warning? Have you had any particular issues with your Mac or MacBook Pro service battery? Tell us about it in the comments below.

Also See: How to record Facetime Call on IPhone or Mac