You are here: Home / How to / Nvidia Fast Sync and it Offer Gamers

Nvidia Fast Sync: When Nvidia launched the Pascal and Maxwell GeForce GTX graphics cards, a new feature came with them, Fast Sync. It is designed to provide another way to V-Sync that delivered lower latency and no tearing. It could be the answer to the gamer’s prayers. So do you know what is Nvidia Fast Sync and what does it offer gamers?

Graphics card manufacturers always pushing the boundaries. They both offer something new and reasons to part with our money and to keep up with the competition. Now with AMD technologies graphics card arms race is back on. 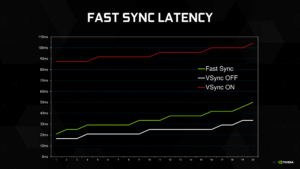 Pascal and Maxwell will still be affordable choices for those of us who cannot afford to drop $500 on a graphics card.

WHAT IS SCREEN TEARING?

Screen tearing is where you’ll see a disconnect between two parts of the screen. It occurs when there is any inconsistency between the speed at which the graphics card sends the image and the speed at which the monitor can show it. While using a 60Hz monitor which means it refreshes every 16ms. But in case if the graphics card sends a frame too early, screen tearing occurs as the monitor isn’t ready for it. You’ll see part of the old frame and part of the new one and they won’t match, hence the tear.

V-Sync was designed to synchronize the GPU and monitor refresh rate but came at a cost. Remember latency came when the graphics engine blocks.

WHAT IS NVIDIA FAST SYNC?

If you already try using V-Sync, you will check a reduction in screen tearing but an increase in input lag. So many pro gamers preferred to deal with screen tearing than the latency of V-Sync so it went largely unused. Nvidia Fast Sync is designed to sort out that.

After releasing the last rendered buffer, Nvidia hopes to remove both screen tearing and latency.

The graphics engine feeds the back buffer with a full-frame that is fed into the new last rendered buffer. Then the engine immediately moves on to the next frame.

By adding an extra step to the process enables a small amount of time for the GPU to deliver a full-frame to the monitor without latency. Because the back buffer is always available to receive another frame from the engine. This frequent shuffling of frames is coordinated to deliver frames as fast as the hardware is capable of. As a result, the delivery of whole frames at the maximum speed the hardware is capable of delivering and displaying.

The advantage of gamers is clear. You get less screen tearing having no latency you would see if you were using V-Sync. When you’re playing fast-twitch games, it makes a real difference.

HOW TO ALLOW NVIDIA FAST SYNC

If you wish to use Nvidia Fast Sync you will need to use it through the Nvidia Control Panel.

At first, right-click an empty space on your desktop and select Nvidia Control Panel.

Choose the dropdown to the right and select Fast.

If you want to change the setting from use application setting to fast, then make sure V-Sync is manually disabled in all your games. Some games use V-Sync without telling you. If you have any problem with graphics after making this change, then visit the graphics settings but make sure V-Sync is off.

Personally I use Nvidia Fast Sync and it works well and sees little or no screen tearing and no perceptible latency. I only play few fast-twitch games but even with those, the rendering looks smooth and silky even on my old GTX 970.