Steam also lets you add non-Steam games however, Microsoft Store apps won’t show up in the list as well. There’s also a little hack to getting around it but it does not seem to work on Windows 10 1809 actually. It is still possible to add a Microsoft Store game to Steam and also the process is really much more simple.

One of the features in Steam on Windows is that it gives you permission to add games manually. However, it is limited to EXE based games that are not downloaded from the Microsoft Store. Now that Microsoft or Windows Store is one of the major sources for Games, it should make sense to add those games to Steam as well. But, there is no direct support for the games installed from the store as well.

How can you Add Windows Store Games to Steam?

In order to add Microsoft Store games on Steam, then you need to download and install an app called UWPHook. Then run the app and from the list of installed apps, choose the game you want to add to Steam. Then tap on the ‘Export selected apps to Steam’ button.

If you guys have Steam running, then quit it from the System Tray and then run the app. Open Steam and tap on Library. The game should show up in your library as well. When you tap on the Play button, it will then open the game. 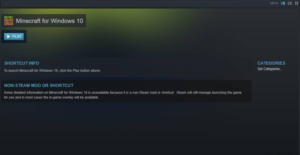 Whenever you add games to Steam, the time you play the game is logged there actually. Other than that, there are no other advantages to this. If you want, then you can also set categories for the game.

If you ever want to delete the app from Steam, it’s really easy. Open the app, go to your Library, and then right-click the game. From the context menu, choose the ‘Delete shortcut’ option and then the game will be gone.

If you also have other games, i.e., non-Microsoft Store games that you want to add to Steam you can do that too. All you have to do is head to your Steam Library and press the little plus button at the bottom. Choose ‘Add a non-Steam game’ from the menu and choose the EXE of the game that you want to add.

This limitation along with Microsoft Store games is only there as the games are UWP apps and they have limitations that normal desktop apps do not have. It’s basically the absence of an EXE file that avoids Steam to find it and add it to its library as well.