The turn of the century saw Microsoft purchase the company Visio, and along with it the software of the same name, for approximately 1.3 billion dollars. Having adapted it to their own concepts, they then proceeded to publish it as part of their Microsoft Office family also under the name Microsoft Visio. Since then, newer versions of the tool have released regularly, but never as part of the several Office Suites. However, nowadays, Visio is available as part of the “Standard” and also “Professional” editions of MS Office. And also as an additional purchase for Microsoft 365 as well. In this article, we are going to talk about The Best Microsoft Visio Alternative you Should Know. Let’s begin!

The normal home user is willing to spend $300 for the “Standard” version and $590 for the Pro version. A quick glance at the scope and price of the program actually lets you know. That the application is basically designed for professional use in larger companies. Something that also explains the relatively small circulation of the program. It is probable that an available budget is too low to fund the acquisition of this Microsoft software, or perhaps that the program is too complex for the intended purpose. If this is the case, then it is worth noting that cheaper, or indeed, free alternatives are available and may be a better choice as well.

According to the developer of Lucid Software, their program “Lucidchart” is used by more than 15 million users as an alternative to Microsoft Visio. The web application, which was released in 2008 and is also written in a variety of coding languages. That includes Java, Ruby, PHP, and JavaScript, which can be accessed directly through the official website. A prerequisite is now having an individual user account. There you can choose between a free “Lite” edition and also three paid subscription options. The latter three grant access to additional features such as presentation mode, or extended storage space. And also removes the limits on documents and chart scope that exist in the free version as well. 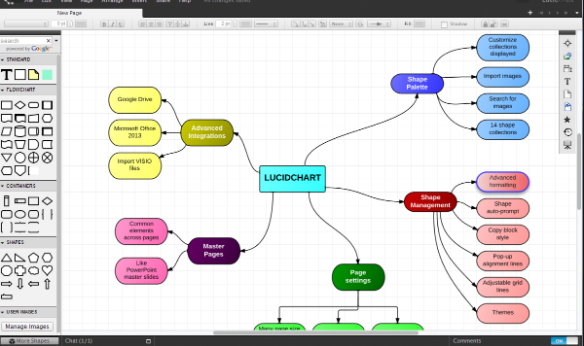 Lucidchart provides around 100 ready-to-use templates to create and design high-quality diagrams. The software covers categories such as education, mind-maps, companies, floor plans, or entity relationships (ER). Thanks to many icons, shapes, and arrows, you can also create your own individual diagrams as well. That allows you to get access to special premium components if you are signed up for the “Pro” or “Team” plans. That includes importing and editing existing Visio projects. You also have the option to save finished projects to their servers, or download them directly to your device in these following formats:

Coming in both free and also paid flavors, Gliffy is a robust diagramming app that fully embraces the cloud. It integrates with services such as Google Drive, Confluence, and JIRA to allow you to collaborate on your UMLs, flowcharts, and all other diagramming projects seamlessly. Gliffy is free for students, however, others get access to the ‘Basic’ version of the software (after a 14-day trial with the paid version). That has less templates, images, and so on than the paid version. 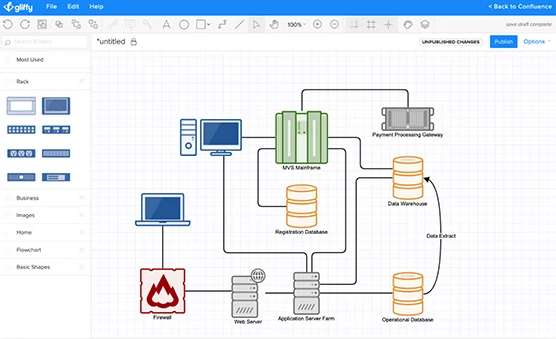 With its simple drag-and-drop interface, a huge variety of exportable formats, and a perfectly usable browser version which is completely free. Gliffy is an excellent choice for those comfortable with diagramming and flowchart software as well. More advanced users, however, may find the free version a little wanting in features and also opt for one of the other, more feature-packed options in this list.

It is created by the German software company yWorks, the yEd Graph Editor is undoubtedly one of the best free Microsoft Visio alternative on the market. The visualization software is written in Java and is based on many Open Course components. Such as the Batik SVG Toolkit and XML Beans from Apache, or several libraries like dom4j and TwelveMonkeys (both under BSD license). But, it is not published under a free license, meaning that we cannot change source code. But yWorks has made the cross-platform editor, that is suitable for Windows, macOS, Linux, and also the Java Runtime Environment available for use free of charge. Alongside the desktop version, which we can find in the download section of the company’s official website. There is also an additional online version, which includes some fee-based “Pro Features” as well. 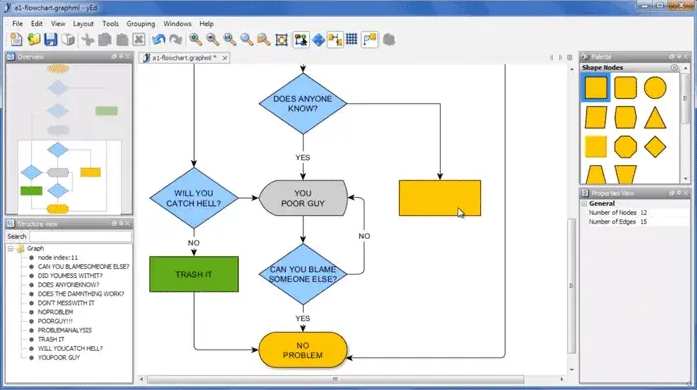 yEd provides numerous components for the creation of versatile and also multifaceted diagrams. Alongside a large number of geometric nodes and also link types. There is also a choice of UML (Unified Modeling Language) symbols for software-specific class and also object diagrams as well. BPMN (Business Process Model and Notation) symbols for the depiction of business procedures, as well as many flowchart components. This alternative to Microsoft Visio has different functions, that will help you arrange and annotate the wished components of a diagram. Automatic layout algorithms, helpful guides, and also orthogonal connections. All of them make positioning very simple. At the same time, the program’s inscriptions give good readability. Below are some of the notable features of the yWorks editor:

yEd Graph Editor also offers six standard saving formats. These are the main format .graphml, the condensed version .graphmlz, the binary format .ygf, .gml (Graph Modeling Language) and .xgml (.gml with XML-based Syntax) as well as .tgf, the “Trivial Graph“ format. On the top of this, there are also many output formats, such as .html, .pdf, .jpg, .png or .gif, in which you can also export your diagrams from this free Microsoft Visio alternative as well.

Starting with the simple stuff as a visio alternative, if you are looking for an instant, easy, and instantly accessible diagramming tool with no bells and whistles attached, ASCIIFlow is actually a good option. 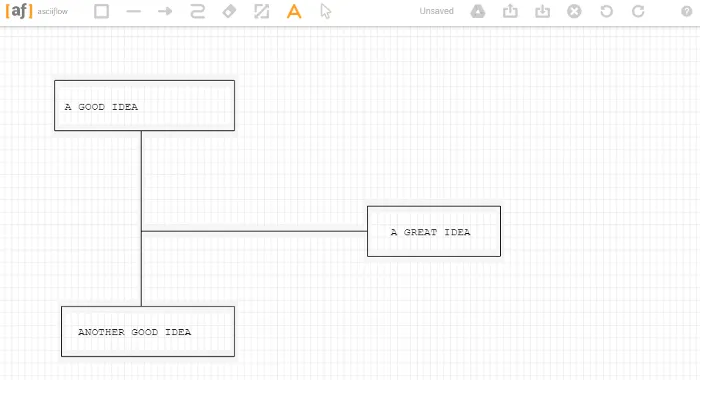 You can forget about having a vast range of shapes at your disposal or you can use this to map out a complex engineering project. However, but for quickly conveying ideas in diagram form, this is about as efficient as you can get. The ASCII format is clear, and you can also use familiar Windows shortcuts (Ctrl + C, Ctrl + Z and so on) to quickly chop and change your diagrams.

You can also change the format of the boxes from ASCII to Lines to make things a little clearer, and sync it all with Google Drive, too. (Though currently, the level of access it requests to your Google Drive may put more security-conscious users off – hopefully, that’s something they can fix this).

You guys can try Graphviz, the near thirty-year-old tool in which you create graphs, hierarchies and so on. It is also a Visio alternative. Through using a command-line utility and the robust DOT language. It takes some getting used to, however, once you get the hang of it, then you will see that it could save you time in the long run. 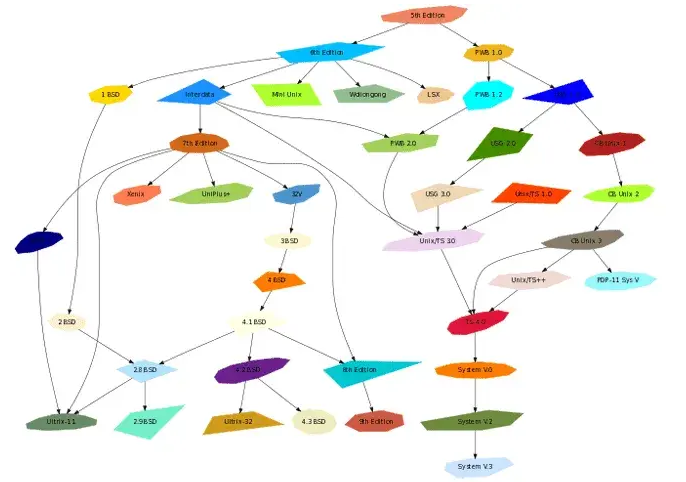 It has a good amount of formats that you can export your graph to and a number of layouts like hierarchical, radial, multiscale, and much more. It’s particularly useful if you are not too fussy about pretty colors. However, are more concerned about entering huge amounts of data that can get instantly organized and generated.

From the developers who brought us the GNOME Project, Dia is actually a visualization software primarily known via the GNOME Linux desktop environment of the same name. This alternative to Microsoft Visio is based on the GIMP Toolkit (GTK+) that is written in C – a free component library that offers diverse control elements for the design of user interfaces. As with most GNOME Project applications, Dia is subject to the GNU General Public License (GPLv2) and is also available for use free of charge. Most Linux distributions actually contain the installation files for the program within the package management system. Or alternatively, we can also find it in the GNOME software selection. There are also versions available for macOS and Windows systems as well, that we can find in the download section of the official website. 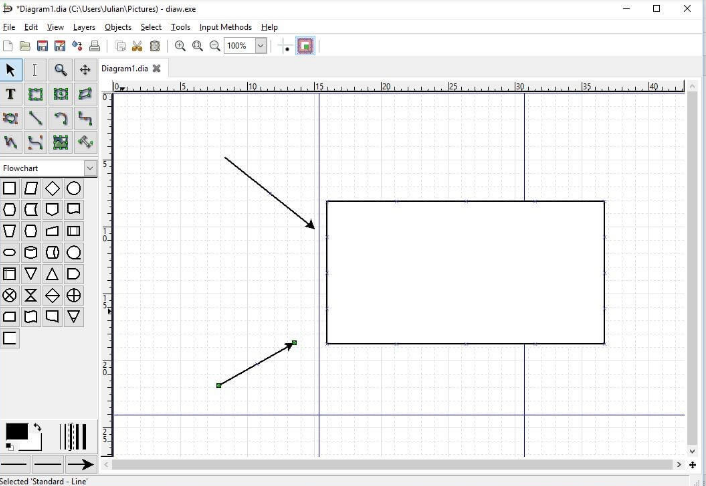 Dia also offers a standard set of general polygon and line objects. That can help you create diagrams and flowcharts for a wide range of industries. An administrator could compile an overview of a firm’s network, an engineer could outline structural systems, or also a database specialist could even visualize an ER (Entity Relationship) model. We can also find other specialist objects for the realization of your diagrams online “shape repository” as well. In order to make the process as easy as possible, the Microsoft Visio alternative also offers many options and also shortcuts. That allows you to select, unselect, copy, and also delete many shapes. This means that you can work with a manageable drawing surface, which thanks to the coordination system, also enables the precise positioning of individual elements as well.

The average format of the coordination system is the Dia XML Format (.dia). Additionally, many other formats are also supported for exporting diagrams. These include the following:

Furthermore, you can also import graphics and pictures in different formats, such as .bmp, .gif, .jpg, or .svg, and integrate them into your flowcharts and diagrams.

It is a Visio alternative. Draw.io has a very responsive and accessible interface, along with the tools in the column on the left and the drawing in the column on the right. You actually don’t need to sign up for an account to use Draw.io, and from the moment you’re on the site. It will give you the option to save your work to cloud services such as Google Drive and OneDrive or your hard drive. 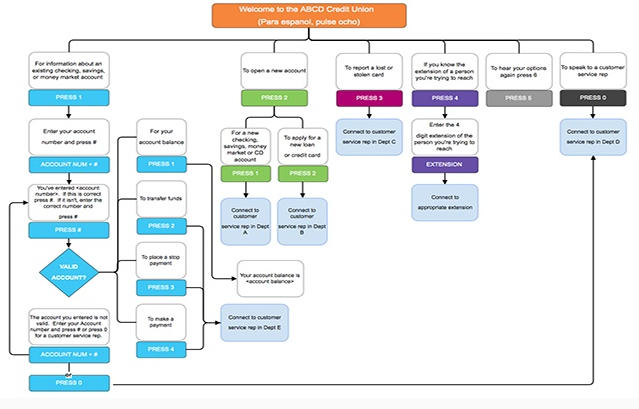 If you connect Draw.io to your Google account, it has very functional real-time collaboration, that let you work on projects simultaneously with others. It’s not a complex tool, so when it’s accessible, it doesn’t offer the depth of features of some other diagramming software.

Pencil Project is actually an open-source Microsoft Visio alternative which is actively maintained by the development community. Their goal for the Pencil Project is to make diagramming as easy as possible and also usable for everyone from a newbie to an expert. It’s regularly updated along with new stencils, templates, and all other features. That lets you export your work to multiple formats, and has integration with OpenClipart.org, letting you instantly search the Web for pictures to make your projects pop.

Alright, That was all Folks! I hope you guys like this Visio alternative article and also find it helpful to you. Give us your feedback on it. Also if you guys have further queries and issues related to this article. Then let us know in the comments section below. We will get back to you shortly.