Apple in March 2020 refreshed its iPad Pro lineup, introducing a faster A12Z Bionic processor, dual rear cameras. A new LiDAR scanner for improved augmented reality capabilities, improved audio. And an optional Magic Keyboard accessory that adds a trackpad to the iPad for the first time. In this article, we are going to talk about iPad Pro 12.9 2020 Features and Specifications. Let’s begin!

According to Apple, the 2020 iPad Pro is its most advanced iPad Pro to date. Along with a number of “pro” improvements for those who want an iPad. That is actually able to replace a computer.

When it comes to design, the iPad Pro is unchanged, available in 11 and 12.9-inch sizes with an all-screen design. And also an edge-to-edge display that does not have a Home button in it. Like the 2018 iPad Pro models, the 2020 iPad Pro features a TrueDepth camera system with Face ID. That uses facial recognition for biometric authentication and a 7-megapixel camera for selfies.

Both of the iPad Pro models feature an aluminum chassis in Silver or Space Gray with flat, rounded edges. That wraps around the Liquid Retina display. The Liquid Retina display is unchanged from the 2018 model. Featuring wide color support, True Tone for adjusting to ambient light. An anti-reflective coating and ProMotion 120Hz refresh capabilities.

However, the general design of the iPad Pro has remained the same, there’s a new rear camera system. There are two cameras. Including a 12-megapixel wide-angle camera and a 10-megapixel ultra-wide-angle camera. That can zoom out two times for a wider field of view.

It has features such as Smart HDR, Quad-LED True Tone Flash, wide color, and 4K video recording at up to 60fps. 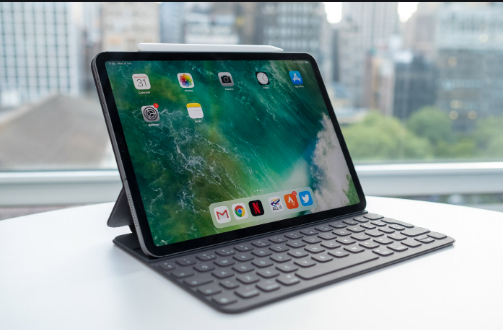 Accompanying the two-camera setup is a new LiDAR Scanner. That uses reflected light to measure the distance of objects up to five meters away in nano-second speeds. Apple says that new depth frameworks in iPadOS combine depth point from the LiDAR scanner with data from cameras. And motion sensors for a whole new class of AR experiences on the iPad Pro.

Apple has also improved the Measure application using the LiDAR Scanner. And it can now automatically calculate a person’s height. Object measurements are faster and more accurate thanks to automatic vertical and edge guides. Additionally, there’s a new Ruler View for more granular measurements.

Inside, the 2020 iPad Pro is with an A12Z Bionic Chip. That features an 8-core GPU, an 8-core CPU. And enhanced thermal architecture and tuned performance controllers faster than ever performance. The Neural Engine handles Core ML tasks and augmented reality features, and then processes data from the LiDAR Scanner.

Just like the 2018 iPad Pro models, the 2020 iPad Pro features a USB-C port for charging purposes and connecting to USB-C accessories including 4K and 5K displays. The USB-C port on the iPad can also be used to charge accessories such as the iPhone and Apple Watch.

Apple has added five studio-quality microphones to the iPad Pro for capturing “super clean audio”. There are four speakers included for an immersive sound experience in any orientation.

With the A12Z processor, the 2020 iPad Pro models feature up to 10 hours of battery life on a single charge. Other iPad Pro features include WiFi 6 support, gigabit-class LTE for cellular models. And storage options ranging from 128GB to 1TB.

The 2020 iPad Pro works with the second-generation Apple Pencil that attaches to the iPad magnetically and charges from a direct physical connection. 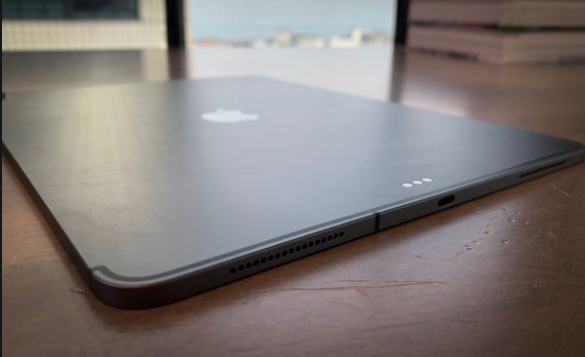 Apple has designed a new Magic Keyboard for the 2020 iPad Pro. That is essentially a new version of the Smart Keyboard. That’s equipped with a trackpad, backlit keys, and a scissor-switch as well.

The new iPad Pro is available for order from the online Apple Store with new order shipping out within a week or two.

mechanism with 1mm of key travel.

The full-sized Magic Keyboard attaches magnetically to the iPad Pro and features cantilevered hinges for smooth viewing angle adjustments up to 130 degrees. It features USB-C passthrough charging and features a folio-like design. That folds and also protects the iPad when it’s not in use.

The new Magic Keyboard is accompanied by trackpad and mouse support for iPad in iPadOS 13.4. Trackpad support on the iPad is designed as a touch-first experience. Along with the cursor appears as a circle but shifting to highlight user interface elements. Such as text fields, apps on the Home screen and Dock, and all other items that can be tapped.

Gesture support lets the trackpad be used to swap between apps, edit text, access the app switcher, activate the Dock and Control Center, and much more. Trackpad support works in both first and also third-party iOS applications.

While the trackpad experience is design primarily for the Magic Keyboard, other mice and trackpads connect to the iPad Pro. Such as the Magic Mouse 2 and Magic Trackpad 2. Mouse and trackpad support is available for all modern iPad. And the new Magic Keyboard even works with 2018 iPad Pro models. Scrolling and gesture support requires a Magic Trackpad 2 or a Magic Mouse 2 and does not work with the first-generation models.

The 2020 iPad Pro models have received no major design refreshes and continue to look like the 2018 iPad Pro models. There are two sizes: 11 inches and 12.9 inches. 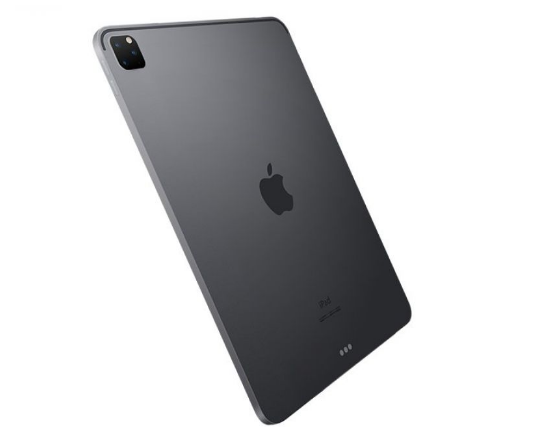 The 2020 iPad Pro models continue to feature an edge-to-edge display with 6mm bezels at the top, bottom, and sides. Instead of smooth, tapered edges, the iPad Pro models feature a more industrial-like band around the sides reminiscent of the design of the iPhone 4 or the iPhone SE.

Apple’s 2020 iPad Pro models use the same “Liquid Retina” edge-to-edge display that was available in 2018 iPad Pro models. That Apple at the time called its most advanced display yet.

The 11-inch iPad Pro features a resolution of 2388 x 1668, while the 12.9-inch model has a resolution of 2732 x 2048, and both have 264 pixels per inch like prior models. The iPad Pro displays feature 600 nits brightness, 1.8 percent reflectivity, an antireflective coating, and a fingerprint-resistant coating.

Wide color support ensures rich, vivid colors that are true to life and accurate. However, True Tone adjusts the display to match the white balance of the lighting in the room to make the screen easier on the eyes.

ProMotion display technology with a 120Hz display refresh rate is included. That makes motion content on the screen smoother, crisper, and more responsive for reading, gaming, watching movies, and much more.

The iPad Pro’s display refresh rate is dynamic and can change depending on what you are looking at as a battery-saving measure. If you are watching a movie or playing a game, the refresh rate is at 120 Hz. But if you are reading a web page or looking at a photo, then you do not need a 120 Hz refresh rate, so it adjusts accordingly. 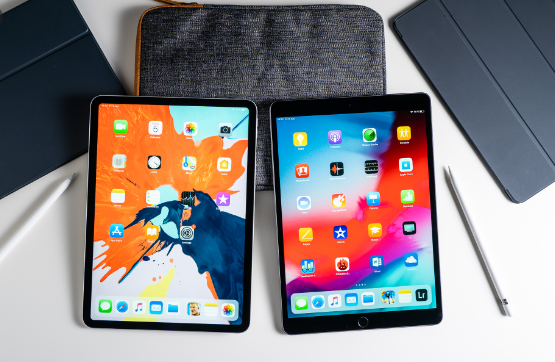 Instead of authenticating and unlocking through a Touch ID fingerprint system, the iPad Pro uses the Face ID feature. Apple has been adding to its products since 2017. Face ID does all of the same things that Touch ID does. Suc as unlocking your iPad, allowing access to third-party passcode-protected apps, confirming purchases, and authenticating Apple Pay payments.

Face ID uses sensors and cameras built into the top bezel of the iPad Pro, and Apple calls its multi-component setup the TrueDepth camera.  If you want to create the scan of your face that’s used for authentication purposes, a dot projector projects over 30,000 invisible infrared dots onto your face.

The dot map is read by an infrared camera and the structure of your face is relayed to the A12Z Bionic processor in the iPad Pro where it is transformed into a mathematical model.

It takes just a fraction of a second for the iPad Pro to scan your face, recognize you, and unlock the device. Face ID is more secure than Touch ID. And is unable to be fooled by a photo, mask, or other facial imitation. An “Attention Aware” security feature makes sure your iPad Pro only unlocks when you look at it with your eyes open. So it knows not to work when there’s not a live person in front of it.

Face ID data is encrypte and safe in the Secure Enclave of the A12Z chip. Authentication happens on-device, with no data stored in the cloud, sent to Apple, or accessible by applications.

The A12Z Bionic features an 8-core CPU, an upgraded 8-core GPU, enhanced thermal architecture. And tuned performance controllers for what Apple says is the highest performance ever in an iPad.

The A12Z Bionic is faster than the chips that include in many PCs, and it was built for demanding tasks. Like 4K video editing and also designing 3D models.

It’s been confirmed that the A12Z is a re-binned version of the A12X with an extra GPU core enabled. The A12X has an 8-core GPU, but one of the cores is deactivated. So it is functionally a 7-core GPU. The A12Z is an A12Z with that extra GPU core available.

The A12Z includes a Neural Engine that’s able to perform five trillion operations per second. That allows more than ever to do in real-time. The Neural Engine powers all of the machine learning features in the iPad Pro. Such as photo search, Face ID, and augmented reality experiences. 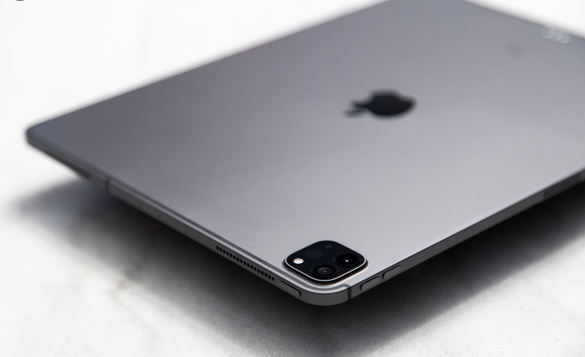 Apple says that the ultra-wide-angle camera can use to zoom out two times for a much wider field of view. Doubling the photo and video possibilities and also enabling different perspectives and multi-camera use.

As for the video, the iPad Pro can record 4K video at up to 60 frames per second with either camera. Additionally, it supports slo-mo video, time-lapse video, and also cinematic video stabilization when recording at 720 or 1080p.

Both iPad Pro models offer up to 10 hours of battery life when surfing the web or watching the video. And can recharge over USB-C and includes an 18W power adapter that ships with them.

Alright, That was all Folks! I hope you guys like this ipad pro 12.9 article and find it helpful to you. Give us your feedback on it. Also if you guys have further queries related to this article. Then let us know in the comments section below. We will get back to you shortly.

Also See: How to Sign a PDF on Mac – User Guide